An unlikely crossover source mashes up with pony in today’s story. 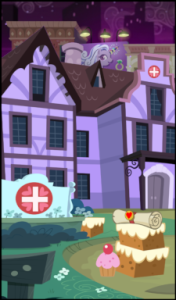 Enter Painless — a young resident physician at Manehattan East Side Memorial Hospital who drew the short lot, and ended up working through Hearth’s Warming. With the city caught in the grips of a blizzard that weatherponies are still trying to get under control, the night is boring, the decorations contrived, and the coffee is as bitter as his sensibilities.

Tonight, Painless has a single, pointless task assigned to him — to keep the company of a lonesome, unconscious stallion who is essentially already dead. In so doing, a young doctor will learn that medicine is about more than scalpels and technique.

FROM THE CURATORS: One of the joys of fanfiction is running across the sorts of stories which the show itself won’t offer us — but which feel like they nevertheless fit right in with the show we love.  “How about a hospital drama with a high realism factor, lots of emotion, and a young doctor learning not to harden his heart to the world?” Present Perfect said in his nomination.  “Plus, it’s a M*A*S*H tribute. You don’t see a lot of those.” We quickly came to appreciate that blend.  “This feels well removed from the show, but not in a way that breaks immersion … learning a lesson in empathy like this is very much in MLP’s bailiwick,” Chris said.  And while it drew many elements straight from the M*A*S*H episode it used as inspiration, it was “an excellent adaptation, and a strong story in its own right,” Horizon said.

That was due at least in part to the way that it brought MLP canon into its tale.  “The turning point in this story comes when it’s revealed early on that the dying stallion is not just another OC like the main characters, but Mr. Cake,” Present Perfect said.  “It was quite the effective tactic, and it pays off well by the end.”  There was also plenty of payoff along the way, Chris said: “I feel like Corner is at its best in its smaller moments.  Painless’ coffee selection in the opening is a tiny but revealing moment, and there are a lot of those scattered about, buttressing a melancholy but touching story about doing what you can for living and dead alike.”

Both those big and small factors were repeatedly cited in our discussion.  “This does some impressive character work at its epistolary core, but what makes it exemplary for me is the emotion past the final turn,” Horizon said.  “The meditation on death that this draws from its crossover source is profound in a way that really touches on the moral core of MLP — about caring, and about what caring means.”  But ultimately, it was the successful meshing of two very different styles behind this story’s strength.  “It’s a powerful juxtaposition, throwing ponies into an unfixable situation,” AugieDog said.  “There’s always a chance in the Pony universe, always a possible solution that will right the balance and mend the broken heart.  This story doesn’t have that … but it treads very close to the line.”