Yet after all these years, against all odds, she finds herself here. At a Wonderbolts show. Just on the wrong side of the glass.

FROM THE CURATORS: To those of us who obsess over our editing process, ‘speedwriting’ can be a dirty word — but as this Quills & Sofas first-place winner shows, sometimes that helps authors trim a story down to exactly what needs to be on the page. AugieDog’s nomination summed it up: “Essentially, Lightning Dust is sitting with her wife Fiddlesticks in a private box at a Wonderbolts show, and in the space of 1,478 words, the author gives us a pretty darn complete look at Dust’s post-‘Washouts’ life, both the good and the bad.” The floodgates of praise quickly opened up.  “This was subtly fantastic,” Present Perfect said, and Soge agreed: “A great find indeed.  At its heart it is a very simple story, but looks can be deceiving.”

What impressed us most was an exemplary economy of words.  “The author’s focus is so tightly held,” AugieDog said.  “There are half-sentences here that could be the short descriptions of much longer stories, but while I may have blinked at one or two of them, I never felt cheated that I wasn’t reading that story.”  Soge enjoyed reading between the lines: “It is one of those fics which manages to say much more than its word count would imply – the state of Lightning Dust’s situation, the bitterness that she managed to conquer, the happiness she eventually found.” And Present Perfect appreciated how it managed to play with expectations despite its length: “There are some signs ahead of the twist where you can see it coming, but the one-two punch in the middle that recontextualizes both the ‘Lightning Dust could never be a Wonderbolt’ mantra and why she’s at a Wonderbolts show in the first place was brilliant.”

Along the way, the attention to detail also drew praise.  “It’s always a great sign when little elements like the chocolates serve double or even triple duty, showing us character while they set the scene and do solid worldbuilding by implication,” Horizon said.  Ultimately, that helped the story cohere into more than the sum of its parts.  “This is such a short story, but everything it does, it accomplishes in precisely the way it needed to to succeed,” Present Perfect said.  And, Soge added, “the ending is very effective, and elevates the whole thing.”

Read on for our author interview, in which The Red Parade discusses doubt, lower-case titles and background ponies.
END_OF_DOCUMENT_TOKEN_TO_BE_REPLACED

Today’s story will really get into your head. 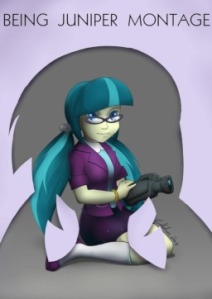 Mere weeks ago, Juniper Montage was a spiteful girl, a thief, and even—for a short time—a magical menace. However, Starlight Glimmer and the Rainbooms managed to reach her, and extend the hands of forgiveness and friendship. Juniper has been grateful for the second chance ever since, and eager to show that she can be a good friend herself.

While touring Canterlot High School with Twilight Sparkle, she comes across two girls in dire cinematic straits. Juniper knows she can help, so she decides to step in. However, in the midst of her attempt, her past—all of her past—returns to haunt her, and her self-esteem pays the price.

Now Juniper must discover for herself what it truly means to be a friend, while also fighting an angry, fearful voice in the back of her mind that continues to insist that she’s not worth anyone’s friendship… and keeps getting louder.

FROM THE CURATORS: Maybe the most basic reason Pony fanfiction exists is to take characters and situations we know from the show and explore them at greater depth. A good piece of fanfiction, though, works even if the reader isn’t familiar with the particular character or situation. “I knew nothing at all about Juniper Montage going in,” Horizon admitted during our discussions, “and this story made me curious enough about her background to get me watching Juniper Montage’s episodes.”

“Bookish Delight,” Fan of Most Everything said when nominating this story, “has an almost inhuman talent for taking the bipedal cutouts Equestria Girls calls antagonists and turning them into fleshed-out, multidimensional people.” AugieDog agreed, saying, “The ‘Ex-Villains’ Club Sleep-Over’ made me very happy” with Horizon adding, “the whole cast is unerringly interesting.”

“What I liked the most here,” AugieDog went on, “was the way the story digs so deeply into the process of redemption.” Horizon noted, “This brings a lot of context to the inner struggle involved in the redemption we see characters breeze through in the show.” “Juniper’s inner demon,” AugieDog said, “is just that—an interior force—and her realization that she has to find a way of dealing with this thing at the core of her personality drives the story.” “Plus,” Fan of Most Everything concluded, “it’s a good meditation on the creative process as a whole.”

Read on for our author interview, in which Bookish Delight discusses core idealism, glasses-wearing nerd girls, and playing, not working.
END_OF_DOCUMENT_TOKEN_TO_BE_REPLACED

Settle in and warm up with today’s story. 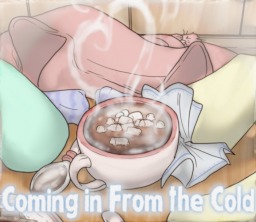 Starting over is never an easy thing to do. Lost, alone, and cold, sometimes a friendly smile and mug of cocoa are all that’s needed to warm the heart.

FROM THE CURATORS: With winter and spring currently engaged in their annual slippery baton pass, here’s a story, as AugieDog put it, “where the cold and the warm are practically characters.” But the main focus lies squarely on Lyra and the mare now known as Bon Bon, newly arrived in Ponyville after the dismantling of her previous life and full of uncertainty.

“Bon Bon’s unsureness about who she is,” Present Perfect said, “was a great place to start” with FanOfMostEverything noting that the readers “get behind Bon Bon’s eyes and stay there for the whole story, the evocative imagery selling everything from struggling through the storm to the anxiety of Lyra getting uncomfortably close to the truth to the warm fuzzies at the end.” Lyra’s equally well painted, AugieDog said, “working as a waitress back home in Ponyville after failing to become a musician in Canterlot.” They’re “two lost mares,” Augie went on, “meeting at the exact moment they most need a friend.”

And more than friends, of course. “I may be a little biased,” Present Perfect said, “as LyraBon is a long-standing OTP, but…the flirting was top-notch.” “Yes, the attraction is mostly physical,” FanOfMostEverything added, “but they’ve only just met and are still getting to know each other, much as Sweetie Drops is still getting to know Bon Bon.” Soge brought up “how well the author utilizes ponies’ physical actions to convey emotion, like ear flicks, tail movements and the like. That helped sell me on their flirting, and the progressively more intimate actions made for a really well realized progression throughout the story.”

Read on for our author interview, in which Timaeus discusses writing as a social activity, second chances, and “playing wild.”
END_OF_DOCUMENT_TOKEN_TO_BE_REPLACED 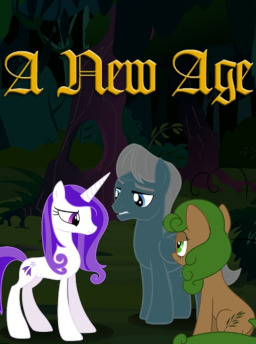 Read on for our author interview, in which SaddlesoapOpera discusses fictional vacuums, plausible reliability, and the earthy aspects of earth ponies.
END_OF_DOCUMENT_TOKEN_TO_BE_REPLACED