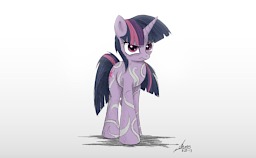 It’s been a long, long time since Spike was stolen from her, but Twilight hasn’t forgotten nor forgiven.  After a long and arduous journey, she has finally found him and his kidnapper.

She will save him.

No matter the cost.

FROM THE CURATORS: While Schemering Sintel doesn’t flinch from its Dark tag, it’s “a very clever grim fic,” as Soge put it:  “It is a great example of how to twist a character beyond recognition without alienating the audience.”  Indeed, it was the way that the story handled its vision of a morally altered Twilight which drew the most curator praise.  “Where this piece excels is showing,” Present Perfect said.  “It’s not just a story about Twilight finding Spike, but about her changing over an extreme period of time filled with hardship. And that change is shown perfectly in the final chapters, when it seems like the plot has finished, but the story is still going.”  Chris agreed: “This is character development done right.  Twilight’s dual growth and collapse as a character doesn’t stop at any one point … the dramatic moments are simply waypoints that show what she’s become.”

We also found the construction of the world around Twilight worthy of note.  “It’s a great fantasy adventure,” Present Perfect said, “from the unfriendly civilizations Twilight encounters to the beautifully-described landscapes and the cool stuff like her mythril tattoos.”  Horizon also praised that worldbuilding: “There are some really unique ideas here that feel uniquely Equestrian while supporting a tone we’d never see in the show.”  But in the end, Soge said, it came back to the strong writing of that world’s inhabitants: “It is an adventure that focuses on character rather than action, and is all the stronger for that.”

It was that strength which has kept Schemering Sintel relevant despite its vision of Equestria becoming increasingly obsolete with newer seasons’ canon.  “I think it’s interesting to note to what extent this story is a product of its time,” Chris said.  “The broader world of Equestria wasn’t nearly as well fleshed out before Season 3; I don’t think you could write a story with a similar tone today without doing significantly more to set the stage for all the violence, cynical choices, etc.  But viewed in the light of the first two seasons, this holds up extremely well as a glimpse of how the world can silence our better angels.”

Read on for our author interview, in which N00813 discusses friendship entropy, thematic architecture, and glued-together pieces.

I’m currently a Master’s student, studying in the UK and hoping to enter the medical field.

I used to really like Luna.  It wasn’t until after I started writing that I figured out why: the potential and desire she has to “do good” and atone for her misdeeds hitting the wall of internal conflict stemming from self-doubt and guilt and external conflict stemming from her poor reputation.  In effect, she was a character at the start of her journey, whilst the Mane 6 (except Twilight) felt like they were in the middle of theirs.  That was back in Season 1 and 2, when she didn’t have as defined a personality as she (probably) does now.

Probably “Amending Fences”.  I enjoyed the realistic handling of old friends/acquaintances growing up and away from each other.  There was no evil villain who targeted their friendship specifically — the separation between Moondancer and the Canterlot trio basically happened because not one of them really bothered to keep up their relationship, so eventually it all just decayed away.

I remember I liked the comedy in Season 1.  I haven’t followed the show since Season 3, so I can’t really give a good answer.  The show also managed to get me into anime, so there’s that.

To keep my current standard of living.

To see what would happen to characters if X or Y happened.  Suffer alongside them, cheer with them, cry with them (even as you plan to kill one of them off).

I am aware of the arguments between the organic-growth “gardener” writing style and the plan-based “architect” writing style.  My personal advice is based off what works for me, and I lean heavily towards architect.

According to your final note, this story was inspired by a number of things, not just Sintel. Can you talk about how each influenced this work and any problems you might have had adapting from so many disparate sources?

Sintel for the general plot of this story.

Heart of Darkness, Spec Ops: The Line and Far Cry 2 informed the general “self-justified descent into darkness” idea; Macbeth informed old Twilight’s hubris, as well as the general tragedy idea of the piece; Lord of War, Blood Diamond (and FC2) helped as inspiration for some of the general feel of the world outside Equestria; Mass Effect inspired some of the side-character behaviour and subplots.

I didn’t face any problems because of how compartmentalised my inspirations were.  I wasn’t straight-up adapting anything except for Sintel.  I was just taking bits and pieces from each and gluing it all together.

Were there any other options Twilight could have considered after finding Spike? Was there any hope of actually saving him?

I would like to point out that Twilight has spent ~20 years out of Equestria looking for Spike, and she’s changed quite a lot.  Spike would also have changed quite a lot in this time, mainly due to the same reasons as Twi (survival, ends-justify-the-means).  It is tempting to think that Spike would retain his standards, but I believe that when separated from any healthy moderating influences and given such a lethal environment, ultimately he would become what he became.

It was my intent to imply that Twilight was interested in saving the Spike she knew, i.e. the one from 20 years ago and not the one he is now.

In-story, Twilight has mentioned the option of wiping Spike’s memory and leaving him essentially a baby in an adult’s body.  The downside is that this will not “save” Spike any better than what she actually did, because Spike now has a fairly hefty bounty on his head.  At best, that second option would give him about a week to a month, before the next bounty hunters come.  Therefore this ending has the same effect, but is thematically less impactful than the current climax.

Another similar option I thought of would just have Twi turn around mid-fight and teleport away, saying that Spike had been here but now is not, and then have her go back to Equestria and continue with the talk with Celestia.  However, that seemed like such an out-of-character thing for her (i.e. leaving her “problems” “unsolved”, regardless of what the “problems” think) as well as being anti-climactic.

An option I did not mention but considered was mindwiping Spike and then having him transported to Equestria to be rehabilitated in a secret facility, but I considered this thematically inappropriate.

The buildup of the first five chapters seems to give us a climax at the two-thirds mark. Why did you elect to tell so much story in the denouement?

Ultimately, I considered Schemering Sintel a story of Twilight’s fall from grace.  I did consider stopping the story on the climax, but I felt that made Twilight’s story end abruptly — she wouldn’t be forced to reflect on her actions.

Don’t get stuck in ideological traps.  Think about motivation and beneficiaries.

You can read Schemering Sintel at FIMFiction.net. Read more interviews right here at the Royal Canterlot Library, or suggest stories for us to feature at our Fimfiction group.