Our recent “Correct the Record” contest asked readers to help us choose authors whose previously spotlighted stories weren’t the best showcase of their writing strengths.  Fitting, then, that today’s feature is about a romance being forgotten.

Rainbow Dash can’t wait for her first date with Applejack; they always have an awesome time hanging out, and a relationship just means there are even more physical activities they can try together. So when the dumb zap apple harvest postpones their date, she decides it’s the zap apples that are going to have to change their plans. Equestria should know by now that wild, ancient magic is no match for Rainbow Dash, especially when she might get laid.

Everything is going according to plan, until she crashes. Or, rather, until she wakes up after crashing and fifteen years have gone by. Fifteen years during which she seems to have been a very busy pony.

Now Rainbow Dash has to adjust to a life she never thought she wanted, and figure out if she’ll ever get to live the life that brought her here.

FROM THE CURATORS: The case for correction here was both simple and compelling. “[Previous feature] Of Cottages and Cloud Houses … does not reflect bookplayer’s claim to fame: romance,” Catalysts Cradle said in Lost Time’s nomination.  “This is a really well planned and well executed story that touches on a lot of deeper themes absent from many other ship fics.”  Our curators quickly agreed.  “All I can say is, our audience has great taste,” Horizon said, amid superlatives like AugieDog’s: “This beat a story of mine in a contest and is also one of my favorite pony stories ever written.”

The main element driving our appreciation was the story’s novel approach to its central romance.  “In a lot of ways, Lost Time takes the idea of ‘Alien Shipping Syndrome’ and turns it inside out,” AugieDog said, “throwing Dash into what seems to her to be a sudden relationship with AJ and then not only showing us how that relationship developed but showing us the characters as they are now beginning to develop a new relationship.”  Horizon also commented on that multi-layered approach: “What’s remarkable about this is that it’s three stories in one — the romance with displaced Dash, the relationship drama with older Dash’s family, and the character drama of displaced Dash’s lost 15 years — all of which work both individually and together.”  And Present Perfect praised the core maturity: “This is, as I put it to myself, a very ‘grown-up’ fic,” he said.  “It’s very focused on the minutiae of a relationship, the meaning of marriage, the full weight of responsibility that having kids requires of a person. You just do not see people writing fanfics about that, and it’s the reason I love this as much as I do.”

The icing on this romance’s cake was exemplary character work.  “Dash is really marvelously used in the central role, contrasting her self-centered approach to daily life with her core loyalty, and naturally building a compelling drama out of that tension,” Horizon said.  “And the children are fantastic supporting characters — whip-smart without being written as tiny adults. Trying to maneuver around them adds an extra layer of complexity to the relationship difficulties. The dinner-without-vegetables scene in particular sticks out in my mind as heartbreaking.”  But equally compelling was the work put into the plot: “On a story level, too, everything dovetails so very nicely,” AugieDog said.  “The revelations in the last chapter are the best sort of revelations because I didn’t at all see them coming, but looking back, I can see them all making perfect sense.”  It all added up to a story deserving of its accolades, as Present Perfect said: “This is really just one of the absolute best fics I’ve read, period.”

Read on for our (all-new!) author interview, in which bookplayer discusses prompt tag, sizzles sold, and Star Wars rejections.

END_OF_DOCUMENT_TOKEN_TO_BE_REPLACED

Our recent “Correct the Record” contest asked readers to help us choose authors whose previously spotlighted stories weren’t the best showcase of their writing strengths.  Today, we’re offering a double feature with two of our three contest winners!

One day, just like that, Celestia decides she’s going to go mad with power.

FROM THE CURATORS: The need to correct the record here ran deeper than Aragón being best known for his comedies.  “His current featured story was written in the style of another author,” MrNumbers said in the story’s nomination.  “This one, though, is some of the tightest comedic construction I’ve ever seen, in a style I don’t think any other author on the site could pull off.”

Not only did voters agree, but Evil is Easy also accumulated superlatives both from FanOfMostEverything’s “Imposing Sovereigns” contest (where it soared to an easy first-place win) and from our curators.  “This is Aragon at his best, and it’s a must-read,” Present Perfect said.  The reason was simple.  “It’s ding-dang funny,” AugieDog said, and Horizon agreed: “Fires on all cylinders.  It’s Pratchett-level wizardry to keep an 18,000-word story so unwaveringly fast-paced and hilarious.”

And there was consistent depth here beyond the hilarity.  “I was extremely impressed by how Aragon managed to weave dozens of different running jokes into a coherent, and even surprisingly poignant plot,” Soge said.  “It is complete insanity from start to end, but there is a method to the madness.”  Present Perfect echoed that sentiment: “The ponies in this story aren’t so much out of character as they are infected with a type of blithe insanity, to which only Daring Do is immune, the poor dear.” 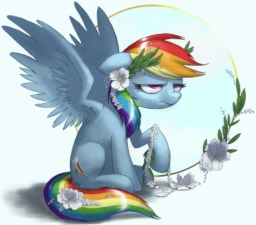 Rainbow Dash knows one thing for sure, she is definitely not a barbarous, uncivilized dolt who doesn’t know polite conversation from a hippopotamus’s rear end. And also that she’s definitely not the one who’s wrong. Rarity is wrong. Rainbow Dash is absolutely, totally, a hundred percent sure of it.

But then why did Rainbow just buy a wagon load of apology bouquets?

FROM THE CURATORS: RCL-wise, this story was the victim of unfortunate timing — when it was published for the Raridash group’s “The Four R’s of Spring” contest (where it was unanimously declared the winner), we had just approved HoofBitingActionOverload’s previous feature for posting.  Spring is Dumb has received acclaim from around the fandom in the meantime.  “An absolutely hilarious story with an amazingly voiced Rainbow Dash,” Titanium Dragon said in this story’s nomination.  “This shows HoofBitingActionOverload’s breadth of skill … a number of his romance stories and comedies are excellent, and I’ve always considered Spring is Dumb to be his best work.”

We agreed — not just that this was a solid romance, but that it’s a superlative story, period. “As someone that always seems to dislike shipfics, I was immensely surprised at just how good this story is,” Soge said, and Chris’ recommendation echoed that: “Unless you’re absolutely 100% allergic to main six shipping, you should check this one out.”

Among its core strengths was its portrayal of the ponies we know and love.  “Characterizations are fantastic all around, including all the side characters,” Soge said. “That it manages to be this funny without ever being caricaturesque is nothing short of an achievement.”  And AugieDog had special praise for the narrative voice: “Re-reading it now, I’m struck again by how effortlessly the author makes it seem to craft a completely consistent character out of someone who contradicts herself every third or fourth paragraph.”

Read on for a few words from our spotlighted authors, in which Aragón and HoofBitingActionOverload discuss Indiana Jones sincerity, Rainbop Dashboard, and how these stories exemplify their styles.
END_OF_DOCUMENT_TOKEN_TO_BE_REPLACED

See the softer side of a much-beloved bureaucrat with today’s reader-selected tale.

The business of government never stops, and paperwork never rests, even on Hearthwarming. But this particular Hearthwarming, Cabinet Secretary and tea enthusiast Dotted Line plans to do his level best to see it, at least, take a break. His ponies need to go home to their families, and he, well, he has plans this Hearthwarming.

FROM THE CURATORS: This week’s feature is a little unusual — we asked readers to choose a story from one of our already-featured authors in order to return the spotlight to their vast wells of talent.  Ten nominations and hundreds of votes later, when the dust finally settled, this Hearth’s Warming Eve tale had captured the most hearts.

“Ghost of Heraclitus’ Whom the Princesses Would Destroy is in the Pony Fiction Vault. Twilight Sparkle Makes a Cup of Tea is in the RCL. But this is, I think, the crown to the scepter and robe,” Titanium Dragon said in A Canterlot Carol’s nomination.  “Whether it be Dotted Line’s conflict with eldritch monstrosities inhabiting his chimney, his conversations with his staff that shows that they are true comrades, to the conversation with the Zebrican ambassador about Prince Blueblood’s non-apology, all the way through to Dotted Line’s plans, every part of this is memorable and enjoyable.”  Voters agreed, and so did we: “This is equal parts amusing, thoughtful and touching, and often in surprising ways,” Present Perfect said.  (Bradel, for his part, so enjoyed the story that he recorded a dramatic reading of it.)

While we found the story engaging throughout, one of the elements that we repeatedly singled out for praise was the way in which it built up themes for powerful later impacts. “It’s the ending where this story truly shines, where we see how far Dotted Line’s compassion and dedication extends,” JohnPerry said.  “For a story dealing largely with bureaucratic affairs, this one is surprisingly heartwarming.”  AugieDog noted that this care with continuity extended to Ghost’s later stories: “Read the sequel, too.  Several things that are set up in A Canterlot Carol don’t pay off till An Afternoon for Dotted Line.  I can’t imagine the one story without the other.”  But that’s worth the effort, Present Perfect asserted: “Dotted Line is one of our fandom’s greatest treasures.  I don’t know how Ghost is so consistently entertaining, save that he, too, is a treasure.”

Read on for a special return interview, in which GhostOfHeraclitus discusses approximate peace, legendary tea-pickers, and Ghengis Khan’s naps.
END_OF_DOCUMENT_TOKEN_TO_BE_REPLACED