Today’s story is, quite simply, poetry in motion. 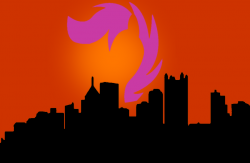 We were the summer-sunset-wind, warm and wild and untouchable.

We were rulers of a crumbled-down kingdom, prince-and-princess of the sandstone sky.

We were long-day shadows, stretching ourselves dark and blurry past our breaking points and more.

We were pulsing breath-and-blood, flowing fast through veins of buildings and wide-open spaces.

Until that moment, that second, when it all fell away.

FROM THE CURATORS: “It’s about an adult Scootaloo and her boyfriend living a high-stakes life of parkour and not giving a f**k about anything,” Present Perfect said when introducing this story to us. And while there was some disagreement on how to summarize it — “It’s about two ponies who can’t live lives where they’re whole, and can’t survive being broken,” Horizon suggested — what we immediately agreed on was the gripping power of the prose.

“This piece marinates in style.  It’s featurable for its narration alone,” Horizon said.  Present Perfect agreed: “The words are thrown like knives, but they’re all on target and everything is just so tight.  This is the first fic I’ve read since White Box that makes good use of textual gimmickry, and the effect is wonderfully kinetic.”  That gimmick — lines with single words shifting the visual direction of the text — “was very well done,” JohnPerry said.  “It never felt hokey in its execution, which is a feat in and of itself.”

But even beyond the surface flash, this found ways to delight us.  “It packed an emotional punch with a very minimalist style,” JohnPerry said. “It takes the ‘Scootaloo as cripple’ idea and actually does something clever with it, and the characters are strangely engaging.”  Though the Alternate Universe tag is well-deserved, that gave it the breathing room to build itself into one of the most approachably literary stories we’ve reviewed.  “The author needs to get off this site and go write a Pulitzer-winning novel,” Present Perfect said, though we’re quite grateful for the ponyfic in the meantime.

Read on for our author interview, in which Stereo_Sub discusses invisible monsters, mutual catharsis, and nocturnal productivity.
END_OF_DOCUMENT_TOKEN_TO_BE_REPLACED