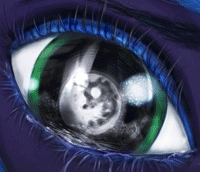 Bitter from her defeat and exile, the Mare in the Moon watches Equestria move on without her.

FROM THE CURATORS: Some of My Little Pony’s central tales, such as Luna’s banishment and return, inspire an endless variety of reinterpretations.  And it’s fanfics like this week’s which make it rewarding to keep returning to that well.  “I’ve seen a lot of different takes on what exactly it was like to be imprisoned in the moon by the Elements, but nothing quite like this,” RBDash47 said.  “I love the idea of the Mare in the Moon as a Sauronesque eye, inspecting Equestria during the full moon, marking its changes. That’s worth the price of admission alone for me. But then the author uses this conceit to tell a wonderful story with a perfectly unreliable narrator about how Equestria and Celestia responded to Nightmare Moon’s banishment.”

That combination was bolstered by vivid and compelling writing.  “It’s full of atmosphere and emotion,” Present Perfect said in his nomination. “The Mare in the Moon is clearly unhinged, her desires changing at the drop of a hat. It also approaches her imprisonment from numerous angles, not just her own perspective — we get the thoughts and actions of Equestrians, her former knights, and of course her sister.”  A strong emotional focus contributed to the story’s power, AugieDog said.  “The whole piece just overflows with Nightmare Moon’s paranoia — it reminds me of Twenty-Eight Boulders, where Chrysalis is convinced that everything around her is spying on her. But when we cut at the end to the POV of the ponies back on Equestria, it shifts the whole story’s perspective in such a fine way by showing us exactly how unreliable a narrator Nightmare Moon has been.”

And ultimately, what sealed the feature was how evocative the details were, from start to finish.  “What hits me is how perfectly the core image of the candle reflects and encapsulates the themes of the story,” Horizon said, while Present Perfect said: “Watching Luna misinterpret Celestia’s actions was maybe the saddest part of this.”  And those included links to the show, AugieDog noted: “I love how it gives us the historical event that could’ve inspired the Nightmare Night traditions we see in ‘Luna Eclipsed,’ especially the whole thing about Nightmare Moon wanting to gobble ponies up.”

Read on for our author interview, in which SheetGhost discusses tough love, Greek traditions, and burner accounts.
END_OF_DOCUMENT_TOKEN_TO_BE_REPLACED