As today’s story reminds us, there are some things in life that are constants — like death, taxes, and Pinkie Pie showing up at the end of the universe. 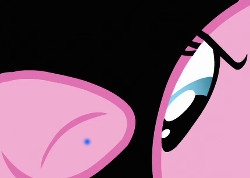 The Spirit Pony is responsible for the End of All That Ever Was. It has always been so. This particular End looks like being a straightforward one – until a certain pink pony intervenes to prevent it happening. Pinkie has a very, very good reason for stopping the Spirit, too…

FROM THE CURATORS: This fun little eschatological romp (and how often do you get to use those words together?) is what it says on the tin: Pinkie Pie at the End of All That Ever Was, stopping the universe from ending because she’s got some unfinished business.  “It’s a fresh subversion of a theme that has been done to death with the show’s immortal princesses,” Horizon said, but we found depth beyond that. “It’s more a look into the power of Pinkie, something that goes beyond crass fourth-wall breakage while still giving her a magic of her own,” Present Perfect said.

One of its core strengths was that clever examination of a pony who is among the most difficult to write.  “I was impressed by the way Pinkie’s character is used in this story,” Present Perfect said.  “It benefits from letting her act in that situation as she does in all situations: like Pinkie.”  Chris was impressed, too: “It definitely speaks to the kind of dramatic whimsy Pinkie’s capable of.  She’s more than just a goof, after all — she takes her goofiness seriously.”

Add to that the strong writing which carried this to a UK of Equestria contest win, and this short little tale sailed through to an easy feature. “It plays with contrast and tone in clever ways,” Horizon said. “It’s got a cute and simple premise which might not carry a longer story, but it packs up enough gravitas to give the ending a satisfying impact.”

Read on for our author interview, in which Loganberry discusses wanderlust, tea, and Egg-Kings.