Turn to today’s story for some cross-dimensional drama with heart. 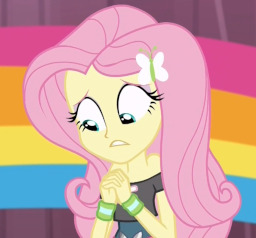 As Fluttershy’s birthday approaches, she learns two jarring things: not all of her friends are as fine with her new relationship as she had previously thought, and her human counterpart is extremely closeted.

This is a story about queerness, friendship, bunnies, humans who think they’re bunnies, magic explosions, and extremely terrible flirting.

FROM THE CURATORS: When we discuss a story which is posted as a sequel, usually our conversation drifts to whether to feature the series’ first work instead.  But in this case, discussion shifted from the original to the sequel once we realized everyone was even more excited about it.  “Everything that makes the prequel, I Am Awkward (Yellow), great is amplified fivefold in Windmills,” Present Perfect said in his nomination.  “The jokes are further between, but they are adamantly memorable. The pure relationship drama has been replaced by a coming-out story that uses the dual-dimensional setup of Equestria Girls to perhaps its fullest extent. I mean, just the ethics of whether knowing a pony is gay means that you’ll out their human counterpart, alone, makes this worth exploring.”

The number of superlatives in our discussion quickly made the breadth of our appreciation clear.  “This knocked it out of the park,” FanOfMostEverything said.  “It has everything: Romance, drama, action, comedy, parallel universe shenanigans. … The story passed by in an amazing rush — mine, not the pacing’s — making the plotlines sync together in brilliant, seamless passes from one narrative arc to another.”  AugieDog, meanwhile, gushed about the story while assigning it a top score: “The author’s character work is gorgeous,” he said.  “There’s a scene in the first chapter where Fluttershy quietly seduces Moondancer that is funny, adorable, and sexy all at the same time, and the jaggedness under the surface of Twilight and Moondancer’s relationship gets completely exposed and explored during an arc that I can only call harrowing.  That the author brings in the Equestria Girls characters as well allows the story to explore their similarities and differences in a way I don’t recall seeing before in a fic.”

That was made even more impressive by the number of moving pieces this juggled.  “What stands out most, perhaps, is how good J Carp is at writing nuanced characters,” Present Perfect said.  “One has to imagine it was already hard enough to write two versions of the same character — and there are a lot of characters in this story — but every canon character has had their motives and personality thoroughly considered in order to drive the narrative. And that’s to say nothing of the one important OC.”  All those factors added up to a compelling argument for time-starved readers to dive into the middle.  “The only things you need to know,” AugieDog noted, “are that Twilight has hired Moondancer to move to Ponyville so they can study the Everfree forest, and that Moondancer and Fluttershy have fallen quite deeply in love.”

Read on for our author interview, in which J Carp discusses planetary rankings, mumblecore maturity, and superior Carolinas.
END_OF_DOCUMENT_TOKEN_TO_BE_REPLACED