If you came for a solidly built Alternate Universe fic, today’s story delivers. 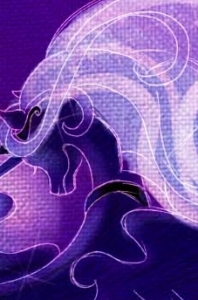 Nightmare Moon won. She defeated Celestia, broke the Elements, banished the sun. This all happened a very long time ago. So long ago, that she has had plenty of time to change her mind.

Of course, fixing our mistakes is never so simple, and never without consequences. Even with particularly potent help.

FROM THE CURATORS: “This is an intriguingly crafted AU whose version of Nightmare Moon feels entirely plausible and whose Discord is quite solidly done,” Horizon said when nominating this fic.  “The story feels appropriately sparse and mythic, but what makes this worthy of the Library is the meditation on forgiveness.”  It quickly caught our attention on multiple levels.  “‘Nightmare Moon won’ is one of the oldest AU cliches there is, but cleverpun manages to use the idea to good effect here,” Chris said, while AugieDog brought out the superlatives early: “The scene at the end of chapter one is about as devastating a thing as I’ve ever read in a pony fanfic.”

But while our reactions to the story cited different strengths, one thing on which we all agreed was how powerfully it developed its premise.  “Just when you think you’ve seen the big reveal, everything escalates to another level,” Present Perfect said.  “And that ending, wow.”  Chris agreed: “The ending is the clear highlight to me, nailing that ‘surprising when you read it, obvious in hindsight’ effect that a good twist aims for.”  Meanwhile, Horizon praised how thought-provoking it was: “The story’s climax is effective horror that brings up some significant moral questions.”

And while the story worked powerfully on its own merits, several of us felt that it was best appreciated as part of the trilogy which it spawned.  “‘Conquer’ is a nicely twisted idea presented in a nicely twisted way,” AugieDog said, “but I would call the two sequels required reading, since they complete the story arc in such a wonderfully tidy fashion.”  Horizon agreed: “Continuing to read the sequels is very much worth your time.”

Read on for our author interview, in which cleverpun discusses blanket patterns, awkward melanges, and B-grade splatter films.
END_OF_DOCUMENT_TOKEN_TO_BE_REPLACED