Keep your friends close, your enemies closer, and your eye on today’s story. 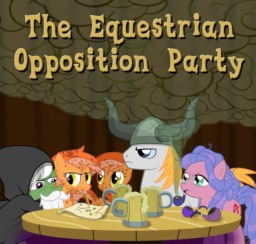 After more than a thousand years of comfortably occupying the throne, Celestia has more than a few enemies.  Every month, they gather to plot her downfall and commiserate over their past failures.  For those fed up with the status quo and ready to see a change, the E.O.P. has ever been a home and respite against the slings and arrows of dull, predictable government.

(Equestrian Political Satire – Be warned!  There will be discussions, debate, civil disagreement, and beer.  Sweet mercy, there will be beer.)

FROM THE CURATORS: After this year’s real-life political circuses, you might be forgiven for running screaming from any story centered around the topic — but in this case, you’d be missing out.  “This is a great example of how to write a comedy with political notes which doesn’t become offensive or excessively reductivist,” Chris said.  AugieDog agreed — “there are no ‘straw ponies’ here” — and it equally turned Present Perfect’s head: “This is quality political humor, up with the Civil Service-verse.”

Part of that was the story’s deft touch in expanding its characters beyond just their given roles.  “This was great reading as slice-of-life about a collection of eccentric misfits, and the ultimate message felt heartwarmingly pony despite the genre of political humor being filled with no small number of bottomless pits and dead-ends,” Horizon said.  It also didn’t hurt that the humor consistently landed, Present Perfect noted.  “It’s a rip-roaring comedy filled with characters who are instantly likable,” he said.  “The joke about the machine sobbing and exploding nearly made me die.”  And every one of us had good things to say about the ending.  “The reveal somehow snuck up on me, even though in hindsight it seemed like the most natural thing in the world, which is always a great sign,” Horizon said, and Present Perfect agreed: “The twist at the end I did not see coming, and it only made the whole thing better, not to mention more believable.”

But all of that would have felt hollow without this story’s gentle touch on an often polarizing topic, and that by itself made it worth reading.  “One of the problems with political humor is that most writers only seem interested in taking the easy way out, belittling the characters and turning them into cardboard caricatures,” AugieDog said.  “This story has fun with the various political beliefs of the characters, but in the end, we see them as Celestia does: as honest, actual ponies who want to make Equestria a better place.”

Read on for our author interview, in which Chessie discusses created gods, clone cooks, and blood-shooting eyes.

I’m a young writer, although young is starting to feel subjective.  I started writing at age nine and actually learned to write at around age 26.  It’s one of those things that requires daily output before you’re really learning the ins and outs.

At 31, I feel like I finally have a handle on how to use commas.  My editors would disagree.

I’m a gender-freak, and that tends to reflect in many of the characters in Starlight Over Detrot (a much longer and more involved story you can find on Fimfic if you’re hunting for more with a similar style to Equestrian Opposition Party).  I’ve got a couple of lovely partners and we live somewhere in the Midwest, in a place where the mercury freezes every winter and the beer flows like hot urine down the wall of a hobo-infested alleyway.  I only know this because I was that hobo some years ago.

I’m big into transhumanism, which is part of where The Equestrian Opposition Party came from.  If you want to meet God, you must make him!

When I started my gender transition, I actually asked my best friend at the time to give me a name.  She’s a complete sociopath, but I loved her all the same.  We had great adventures together, even if they sometimes involved running from the police.

She said I had a ‘Cheshire Cat smile’, so I ended up with the name ‘Chessie’.

Hrmph.  This is incredibly difficult.  I have the most in common with Rarity, but also the least.  If I’m being completely honest with myself, I still smile every time I see Derpy Hooves on screen.  Yes, I know she’s called Muffins now.  I don’t care.

It’s a toss-up between “Do Princesses Dream Of Magic Sheep”, “Slice of Life”, and “Saddle Row Review”.

“Do Princesses Dream of Magic Sheep” showcases Princess Luna at her best — a haunted, emotionally devastated person trying to rebuild her self-esteem and make up for really horrible mistakes.  She’s depressed, she’s broken, she’s masochistic, and she’s still trying to be strong despite all those things.

“Slice of Life” — This is just fan wank, but it’s really good fan wank!  I can’t wait for another fan-wank episode.

“Saddle Row Review” — Up until the release of this episode, I’d have pointed at “Bridle Gossip” as the episode to show people if you want to introduce them to the idea of the show.  After “Saddle Row Review”, I’m pretty sure this is my new ‘go-to’ episode.

Honestly, the show consumed a fair bit of my life over the last five years.  It taught me to write.  It gave me a new appreciation for sincerity.  It introduced me to the idea of transhumanism (Yeah, go figure.  Friendship is Optimal.  If you haven’t read it, GO DO IT!)

Every time I see a new episode, it gives me a sense of hope for mankind.  This is a genuinely kind, sincere, and worthwhile thing we’re part of here.  It’s art, it’s community, and it’s friendship.

I want to live a very long life.  I’ve lived 31 years without being bored terribly often and I want to see our species develop into something even more amazing than it already has.  I want to meet my first artificial intelligence and make friends with it.  I want to sleep with the first intelligent beings we encounter or design that aren’t human.  I want to sit on Mars in a rocking chair on the front porch of my home, listening to the EM-drive ships coming down over New Portland while one of my clones makes dinner, another writes a fresh chapter in our best-selling series, and my boyfriend rubs my feet.

I think it’s the responsibility of creative people to create.  Anyone can be ‘talented’ or ‘creative’.  Most people are.  If you’re not doing anything with it, no amount of potential can make up for that inactivity.

It doesn’t matter what you do with your potential, so long as you’re doing something.

Write between 500 and 1000 words every day.  Even if they suck, you’re writing, and you will improve.

Learn your fundamentals before you show your writing to anyone: grammar, punctuation, and spelling.  They don’t have to be perfect, but they should be good enough that people who take your writing in hand don’t immediately start shooting blood from their eyeholes.  This is coming from someone who didn’t have a good grasp of her fundamentals when she started.

Learn to use the Oxford comma.

What are some tricks to writing a political comedy that doesn’t feel like it’s coming from a specific political viewpoint, and which can be enjoyed by people from across the political spectrum?

Politics are a dangerous thing to write.  You are going to offend someone, regardless of your good intentions, but if you’re writing political satire the goal is to offend everyone equally.  Keep in mind, my politics sit across a broad range.  On any given day, I’m a technocrat, a democrat, a libertarian, and a bit of an anarchist.

If you want to write political comedy, abandon your own political leanings in favor of just being funny.  People who can’t take a jab probably shouldn’t be in politics.

I’m looking at the Big Toupeed Stiffy In Chief right now, but we’ll gloss over that.

In your mind, are Celestia’s motives entirely pure, or does she do what she does at least partly to assuage her guilt and/or convince herself that she’s not “really” an autocrat?

Equestria is a Death World (Go look it up on TV Tropes).  Dragons, manticores, griffins, and all manner of other monstrosities roam the land.  Her people live in an incredibly dangerous environment, but they do live. That should be indicative of just how good a leader she is.

I do think she would eventually want to do away with the job, though, but she’s responsible enough to want to see it passed on to someone who would do just as good a job as she has.

Do you feel that someone with the ability to make their country a better place by taking absolute power has a moral imperative, either to do so or to resist the temptation to?

Honestly, this is down to idealism.  Celestia did have the power to make their country a better place, but power on that scale only works because Celestia herself is uncorrupted by it.  I doubt any human being could have power the way she does and not become a tyrant.

That includes this highly opinionated author.

On a lighter note: Has Dapper got a plan to beat Celestia?  Surely, even he realizes that muscle can only take one so far against a being whose abilities apparently include “magical banishment.”

Next time, he’s planning to punch with the left, dodge, then roll and see if he can catch her with a buck to the chin for a knockout.  He’s told Chairman Sun Spots about this plan and she fully endorsed it.

The reason I wrote The Equestrian Opposition Party was as a reminder that it is the responsibility of any idealist to watch that their idealism doesn’t destroy them.  When Trump was elected, I felt a chill in my bones, but also an air of excitement.  The next four years may be real horror-show, but writers are entering a new Renaissance.

What comes out of this period will be some incredible art, some beautiful words, and a new sense of purpose for mankind as a whole.  I hope we don’t waste it in despair, apathy, or self-pity.

You can read The Equestrian Opposition Party at FIMFiction.net. Read more interviews right here at the Royal Canterlot Library, or suggest stories for us to feature at our Fimfiction group.