Prepare for an adorable war on your heartstrings as today’s story marches into the library shelves. 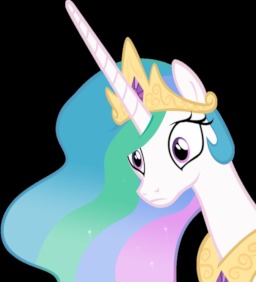 When a colt named “Bad Dude” storms into Celestia’s personal study and declares himself as her latest arch enemy, the Princess can’t help but nearly gush from the sight. As perhaps the cutest villain Celestia has ever encountered, she hurriedly calls for Luna to meet him as well.

But is there more to “Bad Dude” than his cute exterior would suggest?

No. No there is not.

FROM THE CURATORS: This story’s path to a feature started — as so many others do — with outside word-of-mouth.  “The clickbait title and blatant appeal to cuteness should have made this story radioactive to me, but when MightyFenrir recommended it, I had to see what that was about,” Horizon said. “What I found was a story that pulled off a surprisingly intricate balancing act between adorable, silly, authentic, and subversive.”

What immediately leapt out at us was the humor that also sent this story rocketing to the top of the Featurebox. “I’m beside myself,” Present Perfect said.  “The Potatoville line is about the funniest thing I’ve heard all week.  This is what reading Progress was like, way back in the day.”  AugieDog was more metaphorical (but no less effusive) in his praise: “Good silly is hard to do.  When we’re all supposed to be sliding and giggling together down the side of Silly Mountain, more often than not we in fact get our sleeves caught on the rocky outcrop of ‘Eh, it’s okay’ or the creosote bush of ‘Yeah, I guess.’  But this one was silly all the way to the bottom.”

It wasn’t just the humor that caught our eye, though — there was also plenty to love about the characterization.  “What makes the story for me is Celestia,” Horizon opined, while Chris said: “Bad Dude may be one-note, but it’s a funny note.”  And the story carried its premise through to a strong ending.  “It manages to pull off a genuine twist without breaking tone,” Horizon said.  “Watching that unfold was the moment that elevated this from ‘enjoyable read’ to ‘RCL feature’.”

Read on for our author interview, in which naturalbornderpy discusses visual drugs, story graveyards, and riding the soup-can gravy train.

Just a nice, polite Canadian that happens to spend his cold winter nights writing about warm and fuzzy ponies.

One of my favorite movies is “Natural Born Killers” and it came to mind when thinking of a username. Also, I’m overwhelmingly sarcastic and idiotic in real life, so it only made sense to be “naturally derpy”.

Started off with Fluttershy, then moved to Derpy Hooves, then settled on Twilight Sparkle. What can I say? She likes books and organization, and so do I. If only she’d switch over to coffee instead of tea, then I’m sure we’d be wed by now. Luna is always a very close second, though.

Probably still “The Return of Harmony,” with the first appearance of Discord. I remember watching the entire first season of the show, thinking, “This is good, but what’s everyone going on about?” Then the second season starts and Discord makes his grand and (slightly) dark entrance and then my thought process switches to, “This show is for little kids? It’s great!”

It’s also the only episode I show to anyone I’m trying to convert to the fandom. So far, we’re 2/2.

A stomach full of pure sugary goodness. To me, it’s like the visual equivalent of acid mixed with high amounts of THC. It’s simply a show that makes you feel good while watching it and for a long time afterwards. I remember sitting in class a few weeks after discovering the show and hardly being able to keep a smile off my face because my mind was full of so many colorful ponies. I like my serious “Breaking Bad” shows and my adult-oriented comedies like “South Park”, but there’s always room for more “MLP”.

To be happy and content, and to have more positive moments than negative ones. So far, I think we’re right on track.

Because my rock band was never going to make it big and because no one was watching my short films besides me. A better answer is that I’m the type that always needs a creative outlet and this one was the easiest to get into and the simplest to express exactly what I wanted to. Writing can be like therapy. In a good mood? Write a comedy. Bad mood? Write something dark and depressing. Want to write about something important to you? Go right ahead. No one’s stopping you. My only regret is I didn’t get into writing sooner…

Never ask me for advice. I still don’t know what I’m doing. I’ve never taken a creative writing course or even majored in English. Truthfully, I never had much interested in writing until only a few years ago.

Having said that, here are some things I’ve learned since joining this site.

One: don’t be afraid to fail, because it’s bound to happen. I have a graveyard of stories that says so. Also, don’t be afraid to take risks, because you never know what you’ll be good at. I came to this site a year and a half ago wanting to be a dark and depressing writer. Now it seems I’m more well-known for my goofy comedies. Not a bad thing, mind you. Then again, that never would have happened unless I tried something well outside of my comfort zone.

Two: be willing to take advice as long as it’s actually advice. The great thing about releasing stories online is the ability for others to enjoy what you write and critique it in turn. Scary, yes, but also beneficial. I would like to think since joining this site, my writing style has changed for the better.

We were all thoroughly charmed by “Bad Dude’s” shenanigans. What should writers keep in mind when writing children?

Hmm. A difficult question, because I usually don’t write about children… but I would say keep them more adult than they have any right being. Also, children have some of the biggest imaginations out there, so make sure they get the chance to express that.

What was your inspiration for “secret soup phones”?

I ran out of material. I sat down with two small notes before writing “Celestia’s Arch Enemy”. One being Potatoville and other being Bad Dude trips over his cape at some point.

When it got to the point of Celestia calling for Luna, I had to think of something besides her yelling into the other room. Thought process: “They don’t have phones, do they?” “Well, they might have soup can phones, right?”

I’ve been riding the Gravy Falls gravy train every since.

Are Discord and the other villains just humoring Bad Dude, or is this for keeps?

At first, yes, but over time he should be able to win them over with his innocent ways. It honestly helps having a cute team mascot when taking over most of Equestria; ponies are more willing to give up and not resist when it’s an adorable little colt demanding their surrender.

I’m terrible at endings. So, just thanks for the interview and allowing the story into the Royal Canterlot Archives. Tis an honor.

You can read Princess Celestia’s Newest Arch Enemy at FIMFiction.net. Read more interviews right here at the Royal Canterlot Library, or suggest stories for us to feature at our Fimfiction group.