Dig into a famous archaeologist’s past with today’s story. 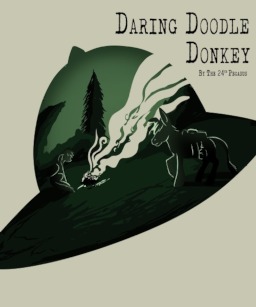 Cranky Doodle Donkey has spent years searching Equestria for that special jenny he lost at the Grand Galloping Gala. He’s been to cities far and wide, and searched from the peaks of the tallest mountains to the floors of the lowest valleys. He’s seen it all, or so he claims. The roads are his and his alone, and the solitude is something he’s simply grown used to.

Until one night, he discovers a filly hiding in a snowy hollow, scared, alone, and freezing to death …

FROM THE CURATORS: In some ways, this story is exactly what it appears to be: a world-spanning, decades-long adventure about two restless wanderers drawn together by fate.  But Daring Doodle Donkey is both simpler than that, and much deeper than that.  “This is almost less a story than an explanation — a look at how to assemble a particularly unlikely but not implausible bit of headcanon,” Chris said.  “Stories like that are usually awful because they exist for no other purpose than to justify whatever ‘clever’ idea they’ve dreamed up.  But this fic exceeds its fellows by not only explaining its premise, but by actually investing in it.”

That gentler, more reflective approach was something we all appreciated.  “The 24th Pegasus isn’t afraid to dive into low-key, low-stakes scenes, despite the Adventure tag this fic carries, and the result is a story in which Cranky and Daring exist as more than just tools to push forward an author’s agenda,” Chris said, and Present Perfect agreed: “For all that this has the trappings of a world-spanning adventure, it’s really just a story about an adoptive family, how they grow apart and together again over a long span of time.  Really remarkable stuff.”  AugieDog, too, was impressed by that more personal focus.  “I’ve always had a soft spot for stories that show how characters who are unlikely to even meet on the show could interact,” he said.  “This is very much a character piece focused on the influence the two have on each other and how they each fit into the other’s lives, and on that level, it works quite well.  A fun story all around.”

That combined with strong prose to seal this story’s feature.  “The descriptions in this are both vivid and economical,” Horizon said, “both in the sense of place they inspire and in the passage of time.”  Present Perfect was also caught by the story’s imagery — “in particular, that early scene where Cranky nearly falls to his death and has to take a few moments to process still being alive,” he said.  “The writing in this story is top-notch, and one of the main draws.”

Read on for our author interview, in which The 24th Pegasus discusses unexplored ruins, sunscreen boops, and marshmallow death lasers.
END_OF_DOCUMENT_TOKEN_TO_BE_REPLACED