From time to time, despite our best efforts, we don’t have an interview ready to post come Friday — but that doesn’t mean we can’t recommend some reading material! We keep track of the stories which passed our approval process but whose authors haven’t responded to our contact attempts. We’d like to give these stories their time in the spotlight too, so here are two RCL-approved tales for your reading pleasure. 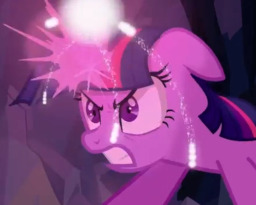 Everypony knows Twilight Sparkle as the sweet, studious unicorn whose magic powers are matched only by her incredible focus and organizational skills. When Twilight’s friends make fun of the way her checklists and schedules control her life, Twilight just laughs.

One day, for reasons known only to her, Twilight goes on an unstoppable organizing rampage. Soon, Rarity decides that she’s had enough, and tries to stop Twilight before she organizes Carousel Boutique into oblivion.

FROM THE CURATORS: “This story is a heck of a roller-coaster ride for its simple Slice of Life tag,” Horizon said in his nomination.  “It starts out with some light (and gorgeously described) character drama over Twilight’s OCD habits, and then peels back the mask for a surprisingly disquieting look at where those habits came from. Then it pulls off a clean double reversal and ends on the same light note with which it started, which is very much to the story’s credit.”  That ending drew most of our praise — for multiple reasons. “This is another great example of one of the things ‘show, don’t tell’ means to me,” AugieDog said.  “At the end, we’re not just told that Twilight has learned the lesson, we see it happen, see her figure it out, see her apply it, and see her come to a changed understanding of herself and her world.”

The strength of that example made it stand out amid other mental-health-focused stories.  “Other equally good stories about similar topics will end with simple affirmation of support for the afflicted, or some pithy aphorisms to try and quell the guilt and shame,” Present Perfect said.  “But letting Twilight come to a realization about what’s true about herself gives her agency and lets her take control of her OCD in a way that, while likely still idealized, is going to serve her much better in the future.”  That lesson also came amid solid writing, as AugieDog noted: “The character voices are terrific across the board, too. A really nice little story.”

The Season of Grace

Fluttershy wakes in the middle of the night on Hearth’s Warming Eve to find Big Macintosh waiting for her outside. He has a surprise for her, and their subsequent adventure rekindles old feelings and memories of Hearth’s Warmings past.

FROM THE CURATORS: This may be a Hearth’s Warming story, but it’s “a worthy feature at any time of the year,” Soge said.  A rare unanimous approval drove that point home. “This is magic, pure and simple,” AugieDog said, and what we found was a magic both easily accessible and with profound depth.  “There are some layers to the story that are so subtle I would’ve missed them entirely without reading the comments,” FanOfMostEverything noted, “but even what I did pick up on is a beautiful tale of fulfilling dreams before it’s truly too late to do so.”

There were two factors we all agreed were behind the story’s excellence.  “This smartly frames the story around the character dynamic, and sells it with quiet grace and vivid language,” Horizon said in his nomination. “It’s also quietly heartwarming and uplifting in a way that mirrors the show at its best.”  Soge agreed: “The writing in this fic is just delightful, absolutely gorgeous from beginning to end, while never actually falling into the trap of going into over-saccharine territory.”  Present Perfect summed it up: “It’s rare to read a story so suffused with joy. Rarer still, one so elegantly written. Lush imagery, a happy pony, and a damned good ship: what more do you need?”