I’ve got a feeling that you’ll appreciate today’s story. 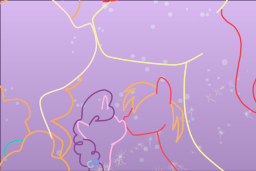 After months of pleasant dating, it’s time for the inevitable meeting of the family. For Sugar Belle, it should be easy as cake. She’s already met three of the Apple Family members, after all. She only has one more to win over.

It’s more complicated than that, she finds.

FROM THE CURATORS: Romance fanfics face something of an uphill climb in consensus processes like ours.  Non-canon ships tend to be divisive based on readers’ connections to the characters, and canon ships struggle not to retread ground already covered by the show.  So when a shipfic overcomes those hurdles, it’s worth noticing.  “This one I’m recommending on the strength of its portrayal of the relationship of Big Mac and Sugar Belle,” Present Perfect said in his nomination.  “I have read scores of shipfics in this fandom, and so few authors are willing or able to get the little things right: the cute moments, the use of closeness for comfort. A relationship isn’t all about making out or grand romantic gestures. This story convinces me these two ponies are good for each other.”

As our discussion continued, there was one thing on which we all quickly agreed.  “It is pretty darn cute,” AugieDog said.  Soge agreed: “Belle and Mac are really cute together.  I liked the characterization work, and I thought that the scene in Sugarcube Corner was something special.”  The handling of the story’s central romance was repeatedly singled out as exemplary.  “There are some fantastic moments between the couple, doing far more to develop their relationship than the show has,” FanOfMostEverything said. “Seeing them interact with one another without any contrived sitcom plots does a lot to sell the relationship for me, especially subtle touches like how Sugar Belle can get Big Mac to open the verbal spigot.”

And it turned out that A Familiar Feeling had some pleasant surprises in store.  “I appreciated the generally solid writing and many quotable moments, but I wasn’t sold until I hit the second chapter,” Horizon said.  “The ‘wandering hooves’ effect was vivid and well portrayed, and the emotions connect and provide a satisfying coda.”  That ending brought a unique and memorable touch to this romance, FanOfMostEverything said: “The last scene and its setup were a peculiar form of quietly creepy-sweet that I’ve almost never seen.”  It all added up, as RBDash47 said, to “a pretty perfect balance of soft, snuggly lovingness and a believable conflict that avoided melodrama. … At the end of the day, it passed the most basic of tests: I had a great time reading it.”

Read on for our author interview, in which Poptard discusses friendswording, Flash vindication, and alphabet remixing.
END_OF_DOCUMENT_TOKEN_TO_BE_REPLACED