We are impressed with today’s story. 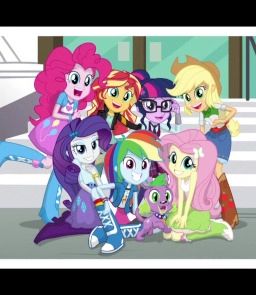 The pilot episode of the Rainbooms’ reality television show, in which the band breaks up.

FROM THE CURATORS: While it’s a truism that stories should work with the strengths of prose rather than try to mimic another medium, it can be a joy to find tales which effectively break that rule.  “Here’s a story that genuinely made me feel like I was watching TV,” Horizon said in his nomination.  “The way it imitates that tightly cut, fast-paced style not only works brilliantly, it also centers golden dialogue and witty repartee that carries the story.”  On its way to a feature, the story accumulated significant praise on that point.  “The way it plays with the medium shouldn’t work nearly as well as it does, and yet here we are,” FanOfMostEverything said.  “All told, this is a brilliant collision of the modern music industry, reality TV, and a certain septet of multicolored humanoids.”

And while that was a combination which invited comparison, the fic found itself in lofty company.  “I was getting serious ‘This is Spinal Tap’ flashbacks all through this fic, and that’s a very good thing indeed,” AugieDog said.  “The story even manages the amazing feat of parodying the characters we know from the Rainbooms while still remaining absolutely true to them, something else that ‘Spinal Tap’ did so very well.”  That wasn’t the only story element whose execution pleasantly surprised us.  “It even manages some visual gags that by all rights shouldn’t have worked — I’m specifically thinking of the running gag with their cell phones — and works in some great running musical references that might be seen as fourth-wall breaking but to me just came off as endearing,” Horizon said.  And Present Perfect loved several different aspects: “The droll narrator helps keep the fast pacing natural, while also providing us with a huge helping of the comedy,” he said.  “The ability to juggle so many characters, and make all their contributions to both halves of the story meaningful, was impressive.  But mostly, I just love how well the constant cuts to the Interview Area were handled.”

It all added up to an oddly endearing package.  “This got weird at times, and I mean that in a good way,” FanOfMostEverything said.  “Overall, it was a great read, somehow combining sincere seven-way friendshipping with the sort of characterization and casual mockery I usually see in goofy crackfics.”  Present Perfect agreed: “Oh god, the references. This was a marvelous, original piece, something completely unlike anything I think I have ever read, fanfiction or otherwise.”

Read on for our author interview, in which PapierSam discusses cheese brags, common pianos, and multitalented block parties.
END_OF_DOCUMENT_TOKEN_TO_BE_REPLACED