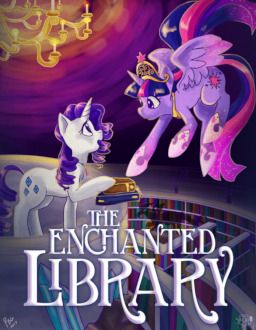 Everypony enjoys myths and ponytales, even if they know such things aren’t real. Alicorns fighting against a spirit of chaos? An ancient princess trapped in a library under a tree, waiting to be found? Quite enchanting and fantastic tales yes, but nonetheless as fictional as Daring Do and other such stories. At least, that’s what Rarity used to think.

FROM THE CURATORS: When we last featured this week’s author, we spotlighted one of her short, high-impact stories while merely name-dropping the longer work which put her on the map.  But readers loved The Enchanted Library so much that they voted it into the running for our effort to find The Fandom’s Best Fanfic™ — and after a tense battle full of upsets and narrow wins, this epic adventure-romance novel emerged victorious.

It was easy to see why it inspired such dedication.  “It is a literary chrysanthemum opening layer upon layer of secrets, inventive worldbuilding, Monochromatic’s signature heartfelt emotional and romantic development, and Rarity being unable to actually tell the truth even if her life depends on it,” FanOfMostEverything said when introducing it to our panel audience.  “It is not just a romance, it’s a romance that shows its work, and a great AU to boot.”  Horizon agreed: “Rarity and Twilight start out as complete strangers, and we get a full-length novel’s worth of words in which they slowly become friends before either one even starts wrestling with deeper feelings.  I honestly don’t think any story has ever sold me on a ship the way that TEL did, and the dynamic between the partners is a source of both joy and tension throughout.”

If all the story did right was that perfectly-paced and grippingly compelling romance, it still would have been deserving of a feature — but top-notch writing in multiple areas elevated it to a story worthy of being called The Best™.  “The characters are worth mentioning for their color,” Horizon said. “Rarity is a fascinating study in contrast that gets her canon complexity across well. We get to see her flaws front and center, but it never stopped me from caring about her and her quest.”  AugieDog agreed: “The Discord here is a master class in how to write a villain, as is pretty much everything about the adventure, the character building, and the romance.”

And several of us commented on its raw power.  “There are multiple scenes in the story that just ring as perfectly as crystal bells, and there are several scenes where the author types a paragraph that tears down everything that’s come before and kicks it flailing off a cliff she’s quietly and calmly been building in plain sight,” AugieDog said. The fic kept those standards high to the very last word (and its in-progress sequel).  “TEL throws a succession of finely crafted punches, and man, the ending just wrecked me,” Horizon said.  “Wrecked.”

Read on for our (all new!) author interview, in which Monochromatic discusses brain HDMI, Disney destinies, and the good kind of selling out.
END_OF_DOCUMENT_TOKEN_TO_BE_REPLACED

Every Friday, from five in the afternoon to eleven at night, Pinkie Pie does volunteer work. She doesn’t have to do it, the world won’t stop if she doesn’t, but she chooses to do it anyway. Even if it’s doing seemingly insignificant little things.

After all, the best ways to help aren’t always with grand gestures, but with the little things in life.

FROM THE CURATORS: When Horizon first nominated Monochromatic’s The Enchanted Library for consideration by his fellow curators, he realized that adding 343,000 words to our already-overflowing list of stories might not work out in the timeliest of manners. The rest of us reluctantly agreed — as AugieDog put it, “our unrelenting schedule demands that it be fed.”

So Horizon nominated this lovely story as well. “This didn’t repeatedly reduce me to tears the way The Enchanted Library did,” he said, “but it’s an equally worthy feature as a bite-sized package overflowing with heart.” And this time, the rest of us enthusiastically agreed. “Safe to say,” Present Perfect wrote, “this punched me in the gut more than once,” while AugieDog found himself “hard-pressed to think of a better piece of Equestria Girls fanfiction.”

“The character writing,” AugieDog went on, “just shines from the easy rapport of Pinkie, Rarity, and Rainbow to the OCs we meet at the call center,” and Present Perfect added, “I can’t remember the last time I read a story about supporting supporters, and I am floored by the amount of sympathy this story has for literally everyone in it.” Horizon praised the story’s “amazing verisimilitude as it examines the ‘behind the scenes’ of the job” and pointed out “an author’s note about the research they did to get the details right.”

So read on for our author interview, in which Monochromatic discusses RariTwi, Barney the Dinosaur’s act of passion, the undying drive to create, and just a little more RariTwi.
END_OF_DOCUMENT_TOKEN_TO_BE_REPLACED