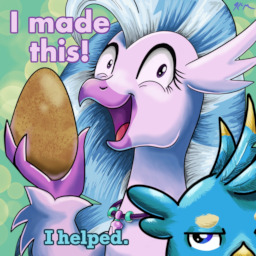 Silverstream and her husband Gallus are going to be parents! Everyone is so excited about their egg.

FROM THE CURATORS: Sometimes our search for quality fanfic leads us to the most un-egg-spected of places — in this case, a story everyone was surprised to find themselves enjoying.  “Look through my voting record, and it will be very clear that I don’t like shipping,” Soge said in his nomination.  “I am also not a fan of the ‘Student 6′. And yet, it seems like putting both together may be a recipe for success.”  Present Perfect had a similar reaction: “Having no particular love of the Student Six, I had actually passed this up a couple of times. I was a fool.”  Not even unfamiliarity was a barrier, we discovered: “I haven’t kept up with the show since mid-season 7,” RBDash47 said.  “I was pleasantly surprised to find this perfectly accessible and enjoyable without any real context.”

Part of that was the exemplary first impression the story made.  “It took four, maybe five paragraphs for this story to win me over completely,” AugieDog said. “Before Gallus has even woken up, just the simple act of showing him and their egg through Silverstream’s eyes gives me everything I need to know to enter the story with as firm a footing as I could want.”  That led into a tale that worked on many levels, Soge said: “Their relationship is the centerpiece of the story, and it sells the reader on it very well. But beyond that, it also explores many interesting topics, including the future of the rest of the students, the lack of privacy of royal life, the idea of egg-laying sapient species (the way Silver describes the egg in many different scenes is fantastic), the issues with Griffons as a species, and so much more.”  He wasn’t the only one commenting on the fic’s vivid descriptions.  “Apart from being well-structured, the author does a fantastic job of painting a picture: the multisensory imagery surrounding the egg itself is beautiful, which really helps us see it through its mother’s eyes,” RBDash47 said.  “Their nest sounds so inviting I’d like to curl up in it myself.”

And while that vividness was our most common compliment, it was far from the only one.  “The character work is just as impeccable as the gorgeous descriptions — I could hear the voices from the show in every line of dialogue,” AugieDog said.  “And I will freely admit that the whole exchange between Gallus and Slipstream about the book he got her on the history of stairs made me giggle.”  Present Perfect agreed: “This doesn’t just give us the domestic life of young, expectant parents, but of these two characters specifically,” he said. “This story could not work without them. And it very carefully crafts conflict from what little we knew about them after season 8, too.”  Ultimately, that chemistry was one of the factors elevating the core shipping, FanOfMostEverything said.  “The interaction between the two sells the relationship fantastically, and the background details and other characters’ involvement keep the story from the ‘only two people in the universe’ feel some shipfics can have,” he said.  “The emotional and narrative pacing are also top notch, letting dread about Gallus gradually build for the reader until it pierces even Silverstream’s happy eggnant* glow. (* You can all blame the Splatoon fandom for that one.)”

Read on for our author interview, in which Jay Bear v2 discusses unfinished Austen, subtitle curses, and feathered fishes out of water.
END_OF_DOCUMENT_TOKEN_TO_BE_REPLACED