Today’s story is no ordinary tale. 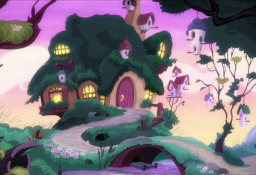 Fluttershy lives a happy life. Every day is special. All of her friends are lovely ponies.

Today is a day just like any other; she wakes in the morning, does her chores, sees her friends, takes a nap and sees more of her friends before an evening of relaxation.

FROM THE CURATORS: One interesting aspect of fanfiction is that — much more than published fiction — it’s a living medium, with stories changing over time.  And sometimes, you stumble across the sort of story that makes you thrilled you gave it a second look.  “Once upon a time, I read and reviewed this for Scribblefest 2016,” Horizon said in his nomination.  “I was blown away by the gorgeous and literary prose, at turns intimate and philosophical, and the incidental worldbuilding; I wasn’t so impressed by the many textual errors. However, I am thrilled to say that the story has since been polished to a fine shine.”  That sentiment was widely shared, with reactions like FanOfMostEverything’s: “Gorgeous is right. I’ve never seen a take on Fluttershy quite like this one.”

Almost every aspect of that take came in for praise — sometimes all at once.  “This has absolutely everything I look for in a Fluttershy story,” AugieDog said while assigning it a top score.  “A gentle pace, beautiful language, understated humor, semi-requited love, quiet insight, a tender sort of melancholy, and kindness infusing it from beginning to end.”  But while the story as a whole drew widespread raves, it was the story’s unusual focus which often got singled out for praise.  As FanOfMostEverything noted: “There’s a fascinatingly animistic aspect to the perspective here, where even the cottage’s squeaky floorboards deserve Fluttershy’s consideration just as much as any of her other friends.”

Amid all of that, the story did exactly what its description promised: simply showed us a day in Fluttershy’s life.  And yet its depth made it so much more.  “It’s got very much an ‘infinite space in a nutshell’ feel to it,” AugieDog said, “showing us the whole world of Equestria by focusing on these very specific images, these very specific moments, so small as to almost be non-events, in Fluttershy’s life.”  Ultimately, what impressed us most was the way it captivated us with those non-events.  “The prose is lush and engrossing, definitely the big thing right, and the author has a knack for writing single sentences that powerfully encapsulate a character,” Present Perfect said.  “This proves that you can write a story about nothing in particular without it being dull.”

Read on for our author interview, in which alt-tap discusses drunken Bs, buttery heads, and adventure couscous.

I was born in Seattle, at the foot of Capitol Hill. The hospital is gone, but I know where it was.

Most of my earliest memories share one of two themes: nature or gaming.

My parents would often take me camping, or climbing up the side of a mountain, or kayaking down a river. Always far from other people, and always an adventure. Those are the best of times.

The smell of salt and sea carried on the wind whistling through the small copse of trees that is all the tiny island can support, far from any dock or building.

The crystalline spring water at the peak of a mountain, cold and clean and perfect.

The infinite stillness far beneath the earth bedecked with stones of all conceivable colors and textures.

This is the family I have, the tireless explorers. From Olympian heights to Stygian depths, we explore everything we can find.

That is one side.

The other is the city.

The towering mountains of glass and steel, endless noise and motion. I love the bedlam of Pike Place Market and the cultural clans of Broadway. The thick, powerful scents of Tenzing Momo and World Spice (wherein you can find more than 20 kinds of salt). And of course, games.

I cut my teeth on Battletech and Warhammer 40,000. I thrive in the contest of minds over a gaming table or board game. Planning one move for hours while I bide my time in Civilization or Twilight Imperium.

There are computer games too, I started with DOS playing with Fractal Engine and, eventually, Descent, but those are just to fill the time between Warmachine or Dungeons & Dragons.

School for me was a bit of an adventure too. Elementary was nothing of consequence, but high school was. I attended a “school” called Wilderness Awareness School wherein I learned wilderness survival skills, animal tracking, Native American teachings and, strangely, Pa Kua.

Martial arts were a feature of my childhood so prevalent it mostly fades into the background. It’s just a thing you do, you know? It is still an important part of my life, though I don’t participate in any formal classes anymore. It real purpose, though, is to always be in search of ways to better yourself. A good lesson, I think.

I have since moved to sunny Hawai’i, though I will be returning to Seattle some day. The caves, mountains, forests and ocean present a lifetime of adventure that I have only begun to explore in the 2 years I’ve been here.

Once upon a time I played a game called Counter-Strike (the old 1999 one). One of the guys I often played with (on the Something Awful server) was ALT-F4 — as a nod to him, and the fact that he seemed to catch a lot of my bullets, I decided to name myself ALT-TAB when I was swapped to his team, but I fucked up and forgot to use caps. And I somehow hit P instead of B. I just tell everyone that the b is drunk.

I don’t really do favorites, but I have a fairly strong connection to Celestia. I like her “chessmaster” approach.

As prior mentioned, I don’t really do favorites, but I quite enjoy “Winter Wrap Up” and “Feeling Pinkie Keen”.

(I usually stick to seasons one and two. I feel the vision of the show has become increasingly muddy of late. The school of friendship was the last straw. I only watch sporadically now.)

At first it was just a really good show.

But then one PAX afternoon I came upon a bunch of fellow weirdos all bedecked in MLP merch discussing the show. From there we carried an eight-foot-tall Pinkie Pie around Seattle and accidentally had a party in Seattle Center with a group of afternoon ravers. From there, I got on Meetup and attended every get-together I could.

Now I get a sense of community and belonging.

I actually started in fiction because of ENG 101. The prof had the class write a page a day for the entire quarter. Eventually I started writing about an astrophobic kid on a flight to his new school on Mars, then a lost soldier trying to find some sign of civilization as the world is ending.

Now I write because I love the art: the creation of worlds and people to populate them. The telling of grand adventures. The twin arts of verse and prose and the occasional merging of the two. And the painting of visions in other people’s minds.

Writing is what fulfills me.

Write every day. Waiting on the bus? Write something on your phone. Taking a break at work? Do a little editing. Write at every chance you get. If you can’t write something good, write something bad. The only thing stopping you is you.

Also, role-playing games like Dungeons & Dragons, Shadowrun or Iron Kingdoms can be excellent practice. I run a D&D game every week and it helps quite a lot with keeping my wit sharp.

What inspired “An Ordinary Day”?

The beginning of “Filli Vanilli.”

Watching Fluttershy singing her heart out got me thinking: what goes on in that buttery head of hers? What does she do when she’s alone? Why is Angel such a cunt? Okay that last one may have been on my mind for a while, but this was a perfect opportunity to explore it.

Ultimately, it’s really about the tragedy of having too much love in your heart. All the animals fill a hole larger and deeper than anything can ever fill. One of her favorites, the raccoon, dies. One of her friends, Candy Main, is technically an enemy of the state.

In the end though, she does get one thing she has been dreaming of. Or is it actually just as Rainbow says?

I like Fluttershy, not because she’s cute or timid or kind, but because she hurts. That makes her one of the strongest.

Did you find it difficult to enter into the Zen-like mindset you give to Fluttershy here?

I made a point in the production of this piece to only write it while in bed before going to sleep. The voice I gave to Fluttershy (because the story is actually entirely in first pony) is a direct result of being intentionally sleepy while writing.

Have you found writing pony stories to help with your original fiction?

If not for pony, and Fimfiction in particular, it never would have occurred to me that other people would ever be interested in my writing. Now I have an original novel in the works. So ya, it’s helped quite a bit.

Do you prefer planning stories ahead of time or letting them develop during the typing process?

I can only operate in the stream of consciousness. I’ve tried to plan stories out, and it always ends up disappointing. (e.g. Sky Pirate Pip, which I will at some point revisit, but it needs to be gutted and redone from the ground up.)

By this point I’m sure you can see the value of editors.

You can read An Ordinary Day at FIMFiction.net. Read more interviews right here at the Royal Canterlot Library, or suggest stories for us to feature at our Fimfiction group.