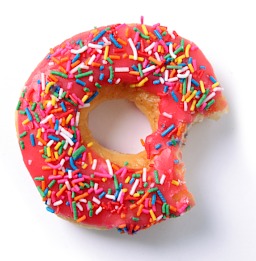 Mama never said there would be days like this.

Donut Joe, on his first day running his father’s shop by himself, gets hit with a hurricane of tempers and accusations.

A well-connected hurricane of tempers and accusations.

Still, customers are customers, and they deserve the best service he can give.

FROM THE CURATORS: While this feature was being written, Everfree Northwest kicked off its seventh year of festivities — so it’s fitting that this week’s story began as an entry to EFNW’s Scribblefest fanfiction competition.  And like the conventions we attend, its goal is to celebrate the show.  “In story comments I called this one of the best feel-good fics I’ve ever read, and it absolutely is,” Present Perfect said in his nomination.  “There are no frills, just solid character work and Twilight learning an important lesson.”  Broad agreement such as Horizon’s sent this to a spotlight: “This is a pleasant, comfortable read with its share of cool surprises. It’s a show prequel very much in keeping with the tone and character of the show itself.”

Unusually, all of us agreed on the story’s primary strength.  “The character dynamic is commendable, and the little tidbits of worldbuilding help add some much-needed heft to it,” Soge said.  Horizon agreed: “Characterization is impressive,” he said. “Specifically, it’s impressive that Pony Joe comes across as a sympathetic and positive character despite our introduction to him being his attacking Spike with a broom.  And the story manages to give us hints of character even for the ponies who stay offscreen the whole time.”  For his part, FanOfMostEverything appreciated the character growth both on-screen and off: “I love how we see Joe’s mental gears gradually shift,” he said.  “The outside perspective on Twilight and Spike does a great job of displaying the strange mix of the bizarre and mundane in their relationship, and their characterization shows great work in extrapolating how they’d behave based on how far they’ve come since.”

Read on for our author interview, in which Minds Eye discusses shareholder dividends, lightning targets, and Fluttershy: Cloud Assassin.

I took it from a character I ended up never writing about — Mind’s Eye the Magnificent, an earth pony magician that could build any device he dreamed up.  I figured the name would suit my purposes just fine. I’ve probably gotten more mileage out of using it as a pen name than for an OC buried in my first couple of stories.

I’m learning to appreciate Rarity more and more as I get older.

“Ticket Master.”  It’s not the best episode, but I don’t think I would be here without it.  I remember first watching the show on a whim one day to see what all the fuss was about.  The Nightmare Moon episodes were fine, but I wasn’t sure ponies were really my thing. The Benny Hill chase scene changed my mind.  That was the moment things clicked for me, and while I was laughing, I thought “Okay, I get it now.” I proceeded to binge all three available seasons over the week.

A connection with my lady love.  Cheerfulness whenever I need it. And a sweet little dividend as a Hasbro shareholder.

All I want is a pretty girl, a decent meal, and the right to shoot lightning at fools.

The fandom inspired me.  There was so much content available for me when I dove into the show, and the breadth of subjects and emotions that it covered astounded me.  Music, artwork, animation, stories — I just felt an inexorable pull to add something of my own. And I had no musical, artistic, or video editing skills.  I had ideas though, so writing it was.

I didn’t have any expectations when I started, just the thought that if I could reach one person and entertain them, make their day brighter by a little bit, then I would be satisfied.  Looking back, I’ve done far more than I could have anticipated.

Side note: The one thing I haven’t seen from this fandom yet is a PMV for The Byrds’ “Turn! Turn! Turn!”  Someone more than talented than I should get on that. Grab a few seconds each of some animations, some art, maybe a clip or two of the show and set it all to the appropriate lyrics.  I think that would be perfect. Ponies are pretty damn human.

There’s a bit of dialogue from “King Kong vs. Godzilla” that has stuck with me since I was a kid.  The scene is a TV executive berating his staff, and he points out the window and says, “Who out there is watching our shows?  Nobody. Because they’re dull and boring and without imagination.”

Imagination is naturally critical to a writer.  If you can’t see your story in your head, how can the reader?  But the advice I want to give concerns where that idea came from.  King Kong vs. Godzilla. A 1960s English dub of a man-in-suit monster flick that I saw when I was ten years old.  So to the writers I say that you need to keep your eyes peeled and your ears open. A little bit of wisdom can come from anywhere.  You need to be ready to catch it.

Not very much, honestly.  Everfree Northwest was holding their writing contest, and I wanted to throw my hat in the ring.  The theme was making friends, and one of Twilight’s earliest friendships was open to explore. I don’t even remember if Pony Joe had his own tag yet when I wrote it.

Though the idea to write from his perspective came from personal experience. I worked as a lifeguard for a long time, and I had to settle quite a few disputes between the little ones.

Do you see the circumstances here as typical of Celestia’s approach to teaching Twilight?

I do.  Celestia has so much more experience and knowledge to pass on than can be conveyed by pointing at a chalkboard.  Critical thinking, working around your limitations — those are skills that need to be practiced. And if Twilight were to solve her problem with Spike as she solved Celestia’s little task, all the better.  I think Celestia would get a kick out of hearing what happened at Joe’s shop, and she would have been ready to step in between the two of them before too long.

What ingredients would you call essential to a good “slice of life” story?

Good characterization is a must.  That’s what keeps Slice of Life stories unique from each other.  Fluttershy walking through a market would notice different items than Applejack.  She would likely have less money to spend than Rarity. When she throws herself down on the couch to rest, it probably isn’t because she bucked so many clouds that the last one told her its name was Herb.

Or hey, maybe she did buck that many clouds.  There’s an idea there, so you run with it. A cloud talked to Fluttershy.  How do you keep that away from Comedy or Random territory? Plausibility. Fluttershy: Cloud Assassin doesn’t sound quite right, so what if the weather team all got the feather flu again?  She’s run ragged trying to help Rainbow keep up with the work. And there you go. An everyday task falls to someone with little experience with it, and they have their own unique reactions to their situation.  That’s the makings of a good little slice of someone’s life.

Do you plan your stories out ahead of time, or do you prefer letting them grow in the typing process?

It’s about a 90/10 split in favor of planning.  I see my stories almost like a movie in my head.  Facial expressions, body language, gestures, a few specific lines of dialogue, who’s doing what, where, and when — that’s all there before I jot down a single word of the rough draft.  Every now and then I get an idea that just doesn’t translate right, and I need to write out two scenes independent of each other before I figure out how to bridge them together.

I suppose a writer knows that he’s improving when he sees problems in a work he was proud of.  This one is dying to get fleshed out a bit more, even just another paragraph here and there to address the conflict.  Still, I’m grateful to be accepted into the Library. I hope everyone reading this enjoys it.

You can read Extra Sprinkles at FIMFiction.net. Read more interviews right here at the Royal Canterlot Library, or suggest stories for us to feature at our Fimfiction group.