Seeing why today’s story is great is child’s play. 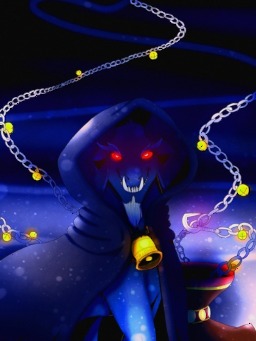 Starlight Glimmer. Trixie Lulamoon. Tempest Shadow. Three ponies that are definitely really great with foals. But there’s no way they’ll mess this up, right? They just have to keep Flurry Heart out of trouble for one night — what could happen in a couple hours?

FROM THE CURATORS: It’s always a pleasure to find stories which can successfully fuse the best parts of classic MLP and the newest canon.  “Here we have Grogar, goat villain extraordinaire from the original G1 series, spiriting Flurry Heart away to his banished city of Tambelon while she’s being babysat by Starlight, Trixie, and Tempest,” AugieDog said in his nomination. “And it’s one of the ding-dang funniest stories I’ve read on the site in quite some time.”  That sentiment was echoed repeatedly as the story sailed to a rare unanimous approval.  “This is absolutely hysterical — never once afraid to take pot-shots at the characters, or have them snipe at each other,” Present Perfect said, while FanOfMostEverything quipped: “Oh, this glorious bit of madness. … Horrible people doing horrible things in the funniest way possible, only in this case, they’re wonderfully horrible in canon. The three heroines (for a given definition of the term) play off of each other and the obstacles they face fantastically, and I always love seeing a serious villain facing silly heroes.”

But regardless of its silliness, there was a core of authenticity in the humor that drew widespread praise.  “It’s humor that’s the opposite of character destruction — the kind where an author says, ‘Let’s take how these characters are in the show, tighten the focus, and dial that up just a bit’,” AugieDog said.  Soge agreed: “It is a really funny comedy executed with great flair, and a sense of how to stretch the characterization just enough to avoid concerns of them being out-of-character, yet making all their actions as fun as possible.”  And Horizon loved its touch with details: “MagnetBolt has a master’s eye for extracting hilarity from the little quirks of the show.  Starlight’s solution to entering Limbo is priceless, as is Trixie’s reaction when Grogar rings the bell.”

That eye for detail extended throughout.  “It is full of delightful passages, to the point I would be hard pressed to pick a favourite,” Soge said, while Present Perfect appreciated its callbacks: “The G1 building material was handled really well, crafting a legendary Tambelon that lives and writhes and all that other good stuff, and yet is in no way safe from being skewered.”  All in all, as Horizon said, its exemplary humor made this stand out even among the author’s other major works: “The Witch of the Everfree would have been my go-to for a MagnetBolt feature, but this was hilarious start to finish, to the point where I had to awkwardly explain to my boss why I was grinning at my desk.”

Read on for our author interview, in which MagnetBolt discusses all-star zones, insufficient explosions, and Bowie anatomy.

Hi there, I’m Magnet Bolt. You may remember me from such fanfiction as The Doom that Came to Tambelon and The Witch of the Everfree. I’m here to tell you a way that you, too, can get rich quick by selling high-quality cosmetics and beauty supplies.

I’ve been writing for a long time now, though I started writing regularly a little over a decade ago when I decided to participate in National Novel Writing Month. I have a degree in Journalism (and also Business and Accounting, though those are significantly less relevant here), and I’d like to blame/thank my college professors for at least some of my efforts, though I’ve learned just as much from Dungeons and Dragons and other roleplaying games — you learn a lot about what you need to keep a plot moving and how to link plot threads when you need to do it on the fly and answer questions live. You gotta learn to fill in plot holes quickly when your audience is right in front of you.

I’ll be honest, my least favorite subject to write about is myself. I’m dreadfully boring. I barely cause any explosions at all!

Magnet Bolt was, at the time I made my account, a blind bag pony that had never appeared in the show. Since then, they’ve appeared in the background in a couple episodes. Interestingly, though a mare in merchandise, they were made a stallion in the show. I’ve always liked making obscure or sideways references to obscure canon, so a relatively obscure pony like that was perfect.

In other places I go by Lawful Nice, which is after the old meme of paladins in D&D being Lawful Good, not Lawful Nice.

Sunset Shimmer — though I admit I do love Starlight too. I’ve got a thing for redeemed villains when it’s done well. If she appears again I’m hopeful Tempest Shadow will take third place away from Trixie, but I’m not going to grade just on potential until I see what the writers intend to do (my money is on maybe a mention but not actually appearing at all).

If we’re allowed to go outside actual ponies on this, Chrysalis deserves a mention. In a show about friendship and understanding it’s really nice that at least once villain has stuck to her guns and continued to be evil despite being defeated twice and sent packing. I’d be fine if she did get redeemed, but it’s also nice that she didn’t just roll over and surrender to rainbow lasers.

This is a hard question to answer. There are a lot of good episodes. I’m gonna give this three episodes instead of just one, each for different reasons.

First, there’s The Cutie Re-Mark. I really like this episode because it showed some glimpses of a lot of interesting parallel worlds, and I know some authors have already taken advantage of these glimpses to build them into interesting tales.

Second, To Where and Back Again. It’s a story where the Mane 6 barely appear at all, and the B-Team has to save the day, and that’s wonderful. Others have said this, but it doesn’t make it less true — doing an episode without the main characters means the writers have faith in the development they put into their supporting cast. Without that kind of development the show would be really shallow.

And the third episode is Rarity Investigates. It’s my favorite Rarity episode, and let’s be honest, Rarity episodes are the most consistently good. She was actually my least favorite horse when I started watching, and now she’s my favorite of the core cast, largely because she’s had so very many solid episodes.

It’s a (usually) well-written show that isn’t dark or depressing in any way. It’s nice having something where it doesn’t end on a downer note and I don’t have to worry about my favorite characters being killed off.

To crush my enemies, see them driven before me, and to hear the lamentations of the women.

Isn’t that what everyone wants?

It helps me feel productive. I enjoy the process. Usually. Everyone here knows that writing is sometimes a painful, drawn-out process of staring at a screen and being frustrated because the words refuse to magically materialize on their own.

Of course as I sit here and look at several large stories that I still need to finish, edit, and publish, I wonder if I write just to punish myself.

I could write a textbook on advice for authors, and other people have done it better than I have — both the writing and the advice. Given the people that will read this, my advice is that you should listen to people when they’re trying to help, and don’t stop just because you’re not getting attention or recognition. You get better with practice and you get more attention the longer you keep at something. Eventually, if you keep trying to improve, and you keep publishing, you’ll get a following and you’ll have work you’ll be proud of.

Briefly. A year later you’ll hate everything you wrote and wonder why people liked it.

What inspired “The Doom that Came to Tambelon”?

David Bowie. They played Labyrinth a couple times in a row on this one channel and I ended up sitting through it, mesmerized by his crotch. I was also bouncing around a bunch of ideas about Flurry Heart at the time — one of my abandoned ideas included her getting a cutie mark in apocalypse magic — and of the few foals in FiM she is definitely the most desirable to kidnap and absolutely the worst to try and keep prisoner.

Why choose to build the story around Starlight, Trixie, and Tempest?

If you were going to pick ponies to be babysitters, they’re arguably the worst ones you could choose. Sure, Starlight is fairly responsible and intelligent, but Trixie is Trixie and Tempest’s social skills are even worse.

Starlight and Trixie have a great dynamic in the show. They’re golden any time they’re together on screen. I’m hoping if Tempest shows up in the show proper that she’ll join the gang of unicorns who are suspiciously powerful compared to Twilight Sparkle.

I mean, I’m just saying — Starlight seems to be as strong as an alicorn, Trixie’s marketing assures me she’s great and powerful and second only to the Princesses, Tempest Shadow is everyone’s edgy overpowered unicorn OC, Sunset Shimmer achieved a form beyond Super Saiyan, and Rarity has a great butt.

Have you watched much of the original 1980s My Little Pony?

Surprisingly, yes. I dated someone a few years before FiM came out that was big into the original MLP series. I watched all of it on DVD, and it is incredibly shallow — but all cartoons were at the time. At least they didn’t kill off the entire cast to sell more toys.

It’s not a terrible show, though most of my happy memories of it are because of who I was watching it with rather than what I was watching.

Because analyzing humor only makes it funnier, how do you approach writing comedy?

It’s easy, you just write something funny. I mean how difficult is that?

Really, the most important thing is to be in the zone and not force yourself to write. You can’t write comedy if you’re forcing the words out, or at least I can’t. I need to get into a rhythm and then the puns start coming and they don’t stop coming, fed to the rules and I hit the ground running.

Just that I’m glad I got involved in writing fanfiction here. There are a lot of great people in the community here and the site is incalculably better designed than most fanfiction sites. Getting involved has helped me learn a lot, polish my writing, get feedback, and make some new friends.

You can read The Doom that Came to Tambelon at FIMFiction.net. Read more interviews right here at the Royal Canterlot Library, or suggest stories for us to feature at our Fimfiction group.