Today’s story is a foray into diplomatic impunity. 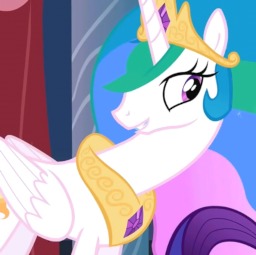 Trade negotiations. Board meetings. Formal garden parties. Not the definition of a fun weekend for Princess Celestia at all.

However, Celestia has a plan. Rarity’s going to join her this year, and by their gossiping powers combined, they may be able to turn this upcoming convention into something a little more unconventional.

FROM THE CURATORS: When we find a story that we appreciate for its depth, it’s a rare pleasure to find it also in top form from the start.  “This story had me hooked from the first line, displaying a detached, dry humor which I found instantly appealing,” Chris said to wide agreement such as Horizon’s: “Chris isn’t kidding about the excellence of the opening. It cracks not just three solid jokes but three different types of jokes in three sentences. The sequence about the meeting’s bureaucratic opening is somewhat low-hanging fruit, but the execution of it is a thing of beauty.”  And that beautiful hilarity extended to the details: “What kind of a name is ‘Snaptibia’?” Present Perfect asked.  “A great one, that’s what.”

But the deeper drama here drew as much praise as the comedy.  “Toward the end, FrontSevens turns to a bit of introspection on how immortality changes one’s priorities and sense of scale, and — importantly — does so without abandoning the tone of that which came before,” Chris said.  “The exaggerated characters which surround Celestia and Rarity complement that tone perfectly as well.”  He wasn’t the only one to comment on the smoothness with which the story made that transition.  “The comedy is never forced, with a breezy quality exemplified by how Celestia and Rarity blithely ignore everything and everyone around them, and it’s entirely hilarious,” Present Perfect said.  “Then, the final scene’s poignancy was unexpected, but not unwanted.”

We found both the comedy and drama bolstered by sharp character work.  “Rarity is just fabulous throughout the fic,” Soge said.  “The way she talked with Celestia worked really well, and every time they started gossiping I had a smile on my face.”  And it was tied together by the fic’s unusual princess interpretation: “I have to say that I quite like this characterization of Celestia,” AugieDog said.  “It’s a huge contrast to the way she’s usually presented — she has no goals at all, and in fact can’t see anything but silliness in what’s going on around her. That’s why the narrative voice is so arch and distancing: this is the unreliable third person narrative going on in Celestia’s head, the one that reduces all conflicts to checkers games and just about every other being in the world to buffoons and caricatures.  But she’s making an honest effort to reconnect to the world, and her plan kind of works.”

Read on for our author interview, in which FrontSevens discusses bonus edgelords, cross-stitch signals, and dingus hahas.

If I leave it as a mystery, I get bonus edgelord points :o

Twilight because she a girl

Read It and Weep because it funny

Good characters, good dialogue, and good jokes every now and then.

One day, I want to ask a really profound interview question on a my little pony fanfiction website

I enjoy coming up with story ideas, learning how to develop characters (depth, dynamic with other characters, fun and interesting dialogue), and writing high-quality comedy jokes.

Out of the several things I’ve learned through practice practice practice, here’s one: When writing, don’t always be married to a joke or an idea. I know it’s hard, but if a joke isn’t working, consider cutting it out of your story, even if it’s really funny. Maybe move it elsewhere, or save it for another story and replace it with something better suited to this story.

Oh and have a big ego. Minimum 5000 words in your RCL interview 👍

What inspired “Fun in the Summit”?

I think, actually, this story idea was inspired by the responses to another fic I wrote — Dr. Rainbow Dash, MD, PhD, etc. It was a ridiculous comedy fic with a very ridiculous ending, which a few people interpreted as dark and got upset that I didn’t tag it that way. I mean, it is kinda dark, but I didn’t expect people to take it as seriously as they did. After the backlash, I thought, Well, do I have to think of all possible interpretations now, just so I don’t offend a few people? dat make writing less fun :’( So I wanted to write a fic that expressed that feeling.

I started out with a story where:

Then I reworked that idea, molding it into what it is now. I liked the idea of the threat of war feeling frivolous instead of feeling significant, and it was funnier to me if war was declared and Rarity wasn’t really affected, but then they also didn’t like her dress and that made Rarity devastated. After a few more reworkings of the idea, I realized it was more interesting from Celestia’s perspective than from Rarity’s, because if war was frivolous to Celestia, the ruler of a kingdom, then why it felt frivolous would be more interesting to explore —

This is a very different characterization of Celestia than we usually see. What led you to take this route?

Usually, my story decisions are driven by “because it’d be funny”. Now, the vanilla “immortal woes” version of Celestia has been done to death, and is boring. I thought it’d be funnier if she was bored and would rather be doing things of a much lesser consequence, like gossiping and teasing volatile world leaders.

I added a layer to give her some depth. I worked in that to her friends and ponies she cares about, she’ll admit that she’s aware that ponies get frustrated with her frivolous behavior sometimes, but at the same time, she just wants to have fun (kinda like meeeee). Not very extravagant as far as character depth and internal conflict goes, but it’s something, it comes from a real place, and besides, it’s a short story, cut me some slack ok

Because discussing comedy only makes it funnier, talk a bit about the balance of the serious and the silly in this story.

Haha yes, dissecting a frog and all that.

I like ridiculous comedy. One thing I know I like is being silly but still grounding the story in some version of reality.

Also, when I write, I like to have something real peeking out from behind the comedy curtain. When a character makes a joke, I like it when it says something about that character, something human. That something can drive the plot, and I think it’s interesting to explore it and have a character face it head-on, much like a non-comedic story would. That’s what happens to Celestia here, ending up in the end ending the way it ends.

Given the serious note on which the story ends, could Celestia’s attempt to make the summit more fun be called a failure?

To Celestia, no. It was a success. Celestia didn’t learn anything. The point of the story was more to explore her character, and for both Celestia and the reader to (hopefully) have some fun along the way.

You can read Fun in the Summit at FIMFiction.net. Read more interviews right here at the Royal Canterlot Library, or suggest stories for us to feature at our Fimfiction group.