Due to some bad luck on timing (and some eligibility goofs on our end), this week we’re still waiting for all of our pending featured authors to complete their interviews.  But don’t worry — we’ve got you covered!  We keep track of stories which have passed through our approval process, but whose authors were uncontactable despite repeated effort.  We’d like to see these great stories get their time in the spotlight too, so we’re presenting a pair of RCL-approved tales for your reading pleasure. 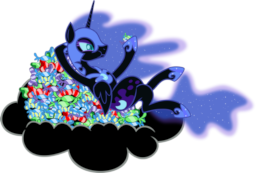 Gobbling and Other Traditional Pursuits
By LadyMoondancer
[Adventure] [Comedy] • 11,188 words

For years Nightmare Moon was considered “nothing but an old pony tale,” but what did those tales actually say about her?  See Luna, Celestia, and Discord as viewed through pony myths and legends.

FROM THE CURATORS: “If Horizon doesn’t give this a maximum score, I’ll eat my hat,” former curator Benman said, to which Horizon simply replied: “Your hat is safe.”  He wasn’t the only one — this collection of Equestrian folk tales earned multiple top scores and a rare unanimous approval.  “I’d have no trouble at all believing that these stories were entombed in one of the dusty back corners of the Golden Oaks library, and the varying tones and styles help sell this as a collection of disparate tales from different times, passed down by oral tradition,” Chris said.

Some of that was due to use of strong source material — as the author noted, Old Favors is a very thinly ponified version of the Russian tale “Old Favors Are Soon Forgotten”, and Horizon pointed out that Coyote and the Boulder “leans heavily on the Sioux folktale ‘Iktome, Coyote, and the Rock'” — but LadyMoondancer’s own creativity also shone through.  “What seals the deal for me is Chapter 2, which appears to be made up from whole cloth and yet is the same high quality as the ones that crib from existing mythology,” Horizon said.  And the storytelling was always vivid and evocative.  “I swear I can smell the smoke from a fireplace and the borscht boiling on top of it,” AugieDog said.  “The last one makes me long for something I never knew I wanted to see: the stories each tribe tells about where the other sorts of ponies come from.  Really nice stuff.”

When it comes to music some ponies have natural talent, while others have to struggle for it. The story of how one pony learned that in the end it’s not who’s playing that matters, but who they’re playing for.

FROM THE CURATORS: How’s this for a classic — it was published to Google Docs back in the days before FIMFic was collecting the MLP fandom’s fanfiction!  It was one of the first stories the RCL considered, too, and even then it gave us some lovely tinges of nostalgia.  “Oh man! I had forgotten this story, but right when she ran into the homeless pony, it all came flooding back,” former curator Vimbert the Unimpressive said. “This was damn good.”  And Chris agreed: “It’s held up much better than many of the stories from that era.”

It was one of the earliest stories exploring the show’s background ponies, but even at the time it painted a vivid picture.  “I will give the story kudos for its portrayal of Octavia’s (and others’) musical life, which are sadly representative of some prodigies’ childhoods, and for not flinching away from showing just how damaging to a person those kinds of regimens can be,” Chris said.  As Present Perfect put it, “It hits a lot of the usual tropes — she hates playing, she has strict parents, she’s a shut-in with no friends — but elevates them to something more.”

[Note: Readers report that the Google Docs links in the story’s Equestria Daily post are now broken.  Other methods of reading the story include nallar.me’s archive of old Google Doc-based fanfiction; and a google search reveals that it was crossposted to Deviantart, either by the author or a fan.]

3 thoughts on “Lost + Found Features: “Gobbling and Other Traditional Pursuits” / “The Sound Of Sunlight””