Today’s story is one to pop onto your reading list. 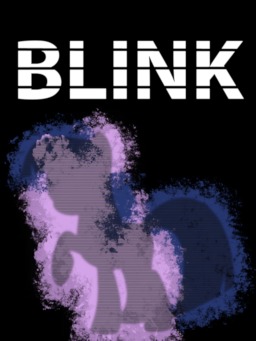 Twilight does some research into her tried and true teleportation spell.

FROM THE CURATORS: On one level, this story is about pulling back the curtains on an unsettling implication of teleportation — one that’s going to be familiar to longtime fans of speculative fiction.  But there’s more to like here.  “This is more than a ‘one idea’ fic,” Chris said. “It doesn’t just stop at the (easily predictable) reveal, nor does it it follow that up with a bunch of wangsting and/or an immediate descent into insanity.”  JohnPerry was similarly impressed by Blink’s nuanced approach: “Deliciously dark, without resorting to an unnecessarily tragic ending.”

What ultimately propelled Blink to a feature, however, was the presentation of its central characters. “The handling of the characters throughout is superb,” JohnPerry said. “Spike and Twilight’s dialogue at the beginning was delightful … it’s a great examination of their relationship and underlines the importance of it, but without dwelling on it too intensely.”  Chris agreed: “The setup helps sell the ending, and makes this a true story about Twilight and Spike, not just an event that happens to involve them.”

The combination of those two factors made this feel like an authentically pony story, despite the dark sci-fi flavor of the core idea.  “It gives me shivers on a level I’ve not experienced much before in fanfic: the ‘that could have been so much worse’ level,” Present Perfect said. “That it wasn’t speaks volumes about how well this spellcrafting headcanon fits into the show.”

Read on for our author interview, in which zaponator discusses sticky names, mutual caregiving, and unintended debate.

I’m 22 years old, a dude, and a member of the Canadian Armed Forces (yes, we’re a real thing). I spent two years in college to be a computer programmer, then decided my life didn’t have enough whiplash-inducing 180-degree turns and joined the Army. Originally came from the land of hippies and trees (see: West coast BC), but have since moved most of the way across the country to the land of flatness and … well, more trees.

I originally got into pony back in late 2011/early 2012, when my brother who was a fan of the show started linking me pony fanart. One of the images was a piece of art for a little-known fanfiction called End of Ponies, and I thought it was kinda neat looking. So I decided to check out this small-time fic, and liked it except for the fact that I understood nothing about the characters or setting. In the end, I had to watch the show just to gain context to read End of Ponies.

Some would say I watch it to this day for that very reason.

Funny thing about that, I didn’t really choose this penname. At the very least, it certainly wasn’t my first choice … or my second, or even my third (etc). You see, back in ye olde days of crappy MMOs and obscure forums, I generally went with some stupid joke name or gimmick (for example: name myself “yourself” in Halo so that people see “You killed yourself.”)

Then when the Xbox 360 came out and I had to make a proper online profile, I decided it was about time I invent a proper name. I tried a lot of names. Everything was taken. Eventually, after a couple hours of futile attempts, I gave up on using real words and just made one up. It was kinda sorta supposed to be a mix between ‘zap!’ and the Terminator. It wasn’t taken, so it’s what I used.

It just sorta stuck, and I’ve never used another username on anything since.

This is real tough, because I’m the rare sort of dude who likes all the episodes. (Yes, I even like Mare Do Well. Sue me! Darkwing Duck was awesome!)

Still, if I absolutely had to pick a favourite, I suppose I’d go with Sonic Rainboom. It’s just a classic.

It’s funny and adorable! Honestly, I’m as much a fan of the world and the storyline as anyone, but the thing that I appreciate most in the show is plain and simple fun. The sense of humour and the dangerously adorable horses are more than enough to satisfy me.

Ahem, but really, all I’ve ever wanted to do is make a positive impact on the world with my presence. In ways small or large, at the end of the day that’s all that matters.

Because it makes me happy! :D

I write to have fun, and people actually reading it is just icing. Sure, I would never complain about the attention, but when it boils right down I could take it or leave it. If I write a story and it’s read by four or five people, as long as I had fun writing it, then I call it a success.

Your only reason to write anything should be because you want to, and because you enjoy it. Maybe that’s a little bit selfish sounding, but you gotta take care of your own happiness or your work will suffer for it.

On that note, this advice still applies to people who want to become ‘popular’, because forcing it out is gonna impact your writing quality. If you find something you’re passionate about, something that you can have a lot of fun writing, then it’ll show in the quality of the finished product, and the odds only go up that people will have fun reading it. It’s a win-win.

Oh, and also, learn lots about grammar. Grammar is important.

What was the inspiration for Blink?

Well, me and a buddy were discussing Twilight becoming an alicorn, when he said…

“Um don’t you have to die to ascend? Twi kind of did. She was blown up with the elements.  Just a scorched spot on the ground.”

I replied, “So? She left a scorched spot the first time she teleported too, does that mean …

In all honesty, I didn’t even realize the fact that this was such a common concept when it comes to teleportation. I mean, I suppose I’d heard of it with stuff like Star Trek, but that wasn’t on my mind at all when I came up with this story. I just thought it was a nifty idea and decided to run with it.

Of course, many have pointed out that this story could have taken a much darker turn, but I very purposefully avoided that. I felt that we didn’t need another dark, deep, and brooding fic. Instead, I chose to look at it in the most positive light possible, and try to end on a somewhat happy note.

The relationship between Spike and Twilight plays a major role in this story. Tell us about how you worked that dynamic into this premise.

Well, firstly, I so rarely get a chance to write Spike. Love the little guy, so I just had to take the opportunity.

When I first envisioned it, he didn’t play quite so heavy of a role in the story, though. It was mostly going to be between Twilight and her thoughts, but as I wrote Spike into the first scene I realized that he could serve a much more prominent purpose than a background character here.

I’ve always adored the relationship between Spike and Twilight, though it’s not easy to pin down exactly what they are. Some people will say brother/sister, some will say mother/son, but I would say that neither of those descriptions quite work. Twilight and Spike need each other equally. At the end of the day, they take care of each other. Twilight doesn’t just care for Spike; he does just as much for her. I wanted to highlight that aspect of their relationship here.

What would you want people to take away from this story?

Well, I certainly didn’t plan for them to take away thousands upon thousands of words of debate on physics, magic, and morality. Really didn’t see that one coming, actually. Not that I’m complaining, mind you. I’m actually happy it got people talking. That being said, there are two things I had originally intended people to have in their mind after reading Blink.

The first one is all but stated by Spike at the end of the story. We have plenty of dark, disturbing, or diabolical things out there, but at the end of the day, just don’t worry too much about it. If you can’t change it, don’t dwell on it. Move on and choose to be happy. It sounds almost selfish to think that way, but the harsh reality is that there’s a whole lot of really sucky stuff you can do nothing to fix. At the end of the day, focusing on that sort of stuff is just a bad time. (Yes, it’s not quite that simple, I know, but it does apply to a lot of the stuff people stress out over, and I do believe it’s good advice most of the time.)

Second, but not least: Spike and Twilight are adorable!

First of all, I’m not a rapper. Call me glasses jacket shirt man.

I just want to say that I’m honoured and humbled by the attention this little story received.

Thank you to all the readers, all the commenters, to the fine folks at the Royal Canterlot Library, and to you. Yes, you.

You can read Blink at FIMFiction.net. Read more interviews right here at the Royal Canterlot Library, or suggest stories for us to feature at our Fimfiction group.