From the dread darkness of Chthonian slumber, from the maddening whispers of voiceless space, comes today’s story of doom.  DOOOOOM!  And makeovers. 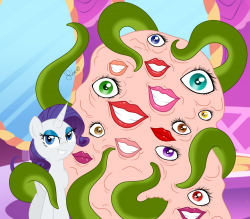 A freakish abomination from beyond the fringes of the rational universe emerges from the trackless depths and finds himself in Ponyville.

FROM THE CURATORS: Like last week’s feature, An Outsider’s Perspective was an entry into Equestria Daily’s Outside Insight contest, and quickly rose to stand out from the pack.  “If Moonlight Palaver was the Outside Insight entry I found the most entertaining, this is the one I found the funniest,” JohnPerry said.  “Its absurd premise belies its wit; it looks like a piece of featurebox bait from the cover, but inside is something really clever and wonderful. It’s not often that you come across something that’s this absurd yet feels so true to the tone of the show.”

But when that wit and show-feel are mere supplements to perfectly on-point comedy, it’s easy to understand what makes this fic exemplary.  “This story is so hilarious,” Present Perfect said, and Chris agreed: “It’s fun, funny, and left me in a better mood after reading it.”  Its whimsical melding of Lovecraftian horror and the magic of friendship won Horizon over: “Everything about this brought a smile to my face.  The core idea is so clever and the execution is just so spot-on that you can’t help but like it.”

Ultimately, it was that tongues-in-the-many-cheeks-of-the-gibbering-faces-of-horror tone which sold us on the piece.  “I’ve never seen comedic juxtaposition done so well,” Present Perfect said.  “It really stood apart on the merits of using such a dark non-pony character and playing it for laughs.  This was one of my absolute favorites from Outside Insight.”

Read on for our author interview, in which Kavonde discusses grandiose monologues, death rays, and Lovecraft hats.

My real name’s Ed, and I’m a substitute teacher living in Bakersfield, California.  I’m a geek of all trades, and both my tastes and my humor run a pretty broad spectrum.  I spend most of my free time on my PC, either gaming or reading, and I run a quasi-weekly D&D game and play in another one.  I really should write more.

It’s my real name, backwards.  I’m creative like that.

Rarity.  She’s always funny, her moral dilemmas are very relatable (even if I’m not much of a fashionista myself), and Tabitha St. Germain is just amazing.  I don’t know how “Simple Ways” didn’t split her brain in half.

Prrrrrobably “Lesson Zero.”  But that’s a hard one.

Lots of laughs, an interesting fantasy setting, and a feeling of having something goofy in common with a lot of other people.

Love, a family, and to have changed the world for the better in some small way.

When the creative spark hits, it’s fun!  Plus, to be honest, I love getting positive feedback from people.  It’s nice to be complimented on and recognized for something you’re good at and enjoy doing.

Writing’s like any other muscle; if you don’t do it for a while, it starts to atrophy, but if you do it regularly, it gets stronger.  But doing it too much can cause strain or tearing, and then you have to recuperate for a while, and …  see, it’s an exercise metaphor.

What inspired you to write this?

Something about the description of the “Outside Insight” contest tickled one of the weirder parts of my brain.  The “from an outsider’s perspective” part, really.  Being a geek well-versed in both D&D and The Dresden Files, the mention of “outsiders” made me think about horrible creatures from beyond the fragile veil of our mortal existence.  Of course, I knew the “hideous abomination threatens Equestria” thing had been done before — by myself, if no one else — so I wanted to put a unique spin on it.  The idea of taking a freakish monstrosity and having him befriend the girls made me grin like a supervillain who just finished his death ray, so I figured I’d go with that.

How did you balance the humor with the more apocalyptic aspects of this story?

Most of the humor comes from the apocalyptic aspects, I think.  Clip only knows how to communicate in these grandiose monologues about the nature of reality and the lurking things that dwell beyond, but at the same time, he’s just this nice, kinda lonely, kinda socially awkward guy.  He’s saying these horrible things, but that’s just because small talk doesn’t exist in the deepest bowels of the eldritch domain of darkness and chaos in which he has passed these unknowable centuries.

The other part of the humor comes from the girls reacting to this stuff.  They get that he’s a nice guy and he doesn’t really mean anything by it, but they’re still learning some pretty horrifying things about the universe they live in.

What all went into crafting the “outsider’s perspective”?

That first section, before he knew the names of colors, was a real bear.  I actually slipped up a few times and described things as “white” or “yellow” or what have you, and had to go back and find other ways to describe them.  I also went back several times to tweak a word here or there in Clip’s monologues, mainly so I wouldn’t be repeating things like “eldritch'” or “abomination” too much, and to make his lines flow with a kind of heavy rhythm.  I kind of pictured everything stopping and fading out around Clip whenever he’d make some kind of pronouncement, like when the camera zooms in on Pinkie saying something extremely odd.

The actual monologues were largely a stream-of-consciousness thing.  I just put on my Lovecraft hat and started typing, then went back to fit things together more logically.

This isn’t really a question, but … that cover art. Geez.

Mwahaha.  Livia, a.k.a. Azure-Art-Wave, actually came up with the idea for the “selfie” shot.  My original idea was a little different, just having Clip leaving the Boutique with his makeover done, but I really liked the idea of him and the Best Pony smiling into the camera.

Give us some insight into what went into that scene, and Clip’s interactions with the mane six.

Like I said up above, I love Rarity.  Her scene with Clip was one of the first ideas I had when I was brainstorming the story.  Rarity, of course, is all about generosity, and she typically expresses that by helping her friends feel pretty and/or cool.  It seemed like the natural course of events, in addition to being a really, really twisted visual.

As for the other girls?  Twi, naturally, would be curious about this strange being saying strange things, and I think she’s going to be struggling to incorporate what she learned into her preexisting idea of reality for quite some time.  Fluttershy’s … well, Fluttershy.  She’s not going to be mean to anyone.  Pinkie’s not quite as fourth-wall-breaking bizarre as she used to be, in my opinion, but I still like the idea that she’s totally aware that she’s a cartoon character; she’s a cuter, fluffier Deadpool.

As for Applejack and Rainbow Dash, I thought it would make sense that they’d treat Clip with a bit of wariness.  Not with hostility, necessarily, but not with the open arms of the other girls.  Of course, they’re more concrete-minded than the others; AJ has a farm to run (and repair), and Dash has Dash stuff to do.  Clip just wasn’t as interesting to them.

Just that I’m thrilled that people have really enjoyed this story!  I had a lot of fun writing it, and a lot of fun seeing the feedback and reactions to it.

But seriously, please don’t ask for a sequel.  There’s only one possible sequel, and it won’t end well for the ponies.

You can read An Outsider’s Perspective at FIMFiction.net. Read more interviews right here at the Royal Canterlot Library, or suggest stories to feature at our FIMFiction group.

3 thoughts on “Kavonde’s “An Outsider’s Perspective””